HONOLULU – Hundreds of anti-globalization activists, anti-capitalist protesters and native Hawaiians joined forces Saturday to march in Honolulu in protest at a summit of Asia-Pacific leaders. 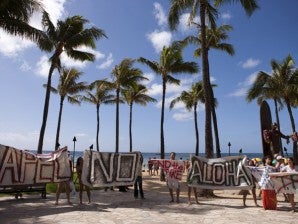 “The leaders of the summit don’t stand with the people of the world but we do,” Liz Rees, an organizer of activist group “World Can’t Wait” shouted through a bull-horn in the thick of some 400 disparate protesters.

Obama arrived late Friday to host the weekend summit of the Asia-Pacific Economic Cooperation (APEC) forum, which wraps up Sunday.

Several of the 21 member economies have agreed on the broad outlines of a new pan-Pacific trade pact that Obama hopes will help the United States shape the commercial rules in a region key to America’s future prosperity.

Critics say that communist Vietnam’s membership weakens the US message that the deal is about fundamental freedoms. Opponents of the deal also include US dairy farmers who fear competition from New Zealand and consumer groups who worry that US pharmaceutical companies will push up drug prices.

“Down with APEC! Down with APEC!” chanted Rees through her bullhorn, her chants met with an identical, louder response as the marchers wound their way through the heavily patrolled Honolulu streets.

The marchers, some blowing Hawaiian conch shells, others banging drums, stopped briefly at a statue of one of Hawaii’s most revered kings.

A small group of native Hawaiians, part of a local sovereignty movement, had joined the protest, wearing traditional kapa cloths.

The demonstration was small compared to the usual protests that accompany major world summits, but there was widespread discontentment at the security measures that were interfering with life in the holiday idyll.

Secret Service, police and army personnel swarmed over the white sand beaches of Obama’s birthplace as authorities locked down a roughly one-kilometer stretch of famed Waikiki Beach and its offshore waters.

Beaches normally filled with bikini-clad tourists were instead shut off by concrete barriers and iron fencing as a pair of Coast Guard cutters cruised offshore.

“This is totally not what Hawaii is about,” local resident Tino Fornas said, gesturing at a roadblock manned by grim-faced police.

Some of the city’s busiest streets were empty due to road closures on routes leading into Waikiki’s forest of resort hotels as federal agents and police barked at any cars or pedestrians that went astray.