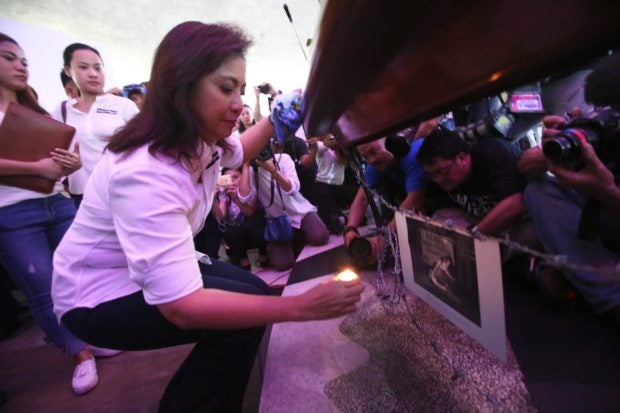 MASS FOR JUSTICE Vice President Leni Robredo offers a candle for victims of extrajudicial killings during the Mass for Justice at the University of the Philippines’ Parish of the Holy Sacrifice in Diliman, Quezon City. —NIÑO JESUS ORBETA

The people who get on President Rodrigo Duterte’s nerves saw themselves together on Thursday at the unveiling of the monument of human rights lawyer and former Sen. Jose “Ka Pepe” Diokno at the Commission on Human Rights (CHR) in Quezon City.

It ended up as a major part of the protest rallies against the draconian policies of Mr. Duterte at the 45th anniversary of the declaration of martial law.

Diokno was among the first opposition leaders arrested after the dictator Ferdinand Marcos imposed martial law on Sept. 21, 1972.

“There were those who followed the three monkeys: those who did not see anything, hear anything, or say anything. But Ka Pepe was different. He was detained for a long time, released and he could be jailed again anytime. But this did not stop him from siding with the truth and fighting for rights of everybody,” Aquino told reporters.

The Diokno monument was built under the auspices of the National Historical Commission of the Philippines and the National Commission for the Culture and the Arts, with the budget approved by former President Aquino.

The memorial was built by Filipino sculptor Julie Lluch.

Diokno’s youngest grandchild, Inez, a law student, in her brief speech said there were “so much injustices as we speak.”

“It is important to remain vigilant,” Inez said. She also quoted his grandfather, who famously said: “Once we accept violence there is no way to control it.”

UP Mass for Justice

Aquino and Robredo were both at the Mass for Justice at the University of the Philippines (UP), which was attended by the anti-administration protesters who marched to the CHR for the unveiling ceremony.

The Mass was capped by the singing of the antidictatorship song, “Bayan Ko,” and the laying of flowers and candles before the “Pieta” picture, a representation of drug killings taken by former Inquirer photographer Raffy Lerma.

Thousands have been killed in the Duterte administration’s campaign against illegal drugs.

“We are here to show our solidarity, that we agree that we should demand justice for all those who have been killed,” Aquino told reporters when he arrived at UP’s Church of the Risen Lord.

He reiterated that the people were his bosses, which was why he went to UP.

“What is painful is that in some parts of our country, it seems we are feeling [the dark past] again. It seems the same thing is happening again,” he said.

Aquino was heartened by the huge attendance of protesters who decried the authoritarian tendencies of Mr. Duterte.

“The good part about today is there are so many people who are concerned from different ages. There seems to be less of a need now to awaken [the people] than it was before,” Aquino said.

He said the sad part was there were those who started the fight when they were young like him but found themselves still fighting.

In a statement, Robredo said the country’s “bitter experience under martial rule taught us the terrible cost of cowardice, complacency and collusion in the face of rising tyranny.” —With a report from DJ Yap

Read Next
Gov’t workers, barangay volunteers show support for Duterte
EDITORS' PICK
Biden vows to stand with Asia on freedom, hits at China on Taiwan
FDA reviewing COVID-19 vaccines’ EUA for booster shots
Legarda emphasizes role of ICC/IPs in nation building this IP month
Climate Change Commission and Nestlé PH to discover sustainability-focused solutions
NCR’s COVID-9 alert level may be downgraded from 3 to 2 soon — DOH
Work-From-Home is here to stay and requires reliable logistics
MOST READ
Drivers now required to take driver’s education upon license renewal – LTO
Gordon to Duterte: You? Teaching me courtesy?
Marcos Jr’s ‘special diploma’ from Oxford: You can have it, too
Can Marcos Jr. be disqualified?
Don't miss out on the latest news and information.