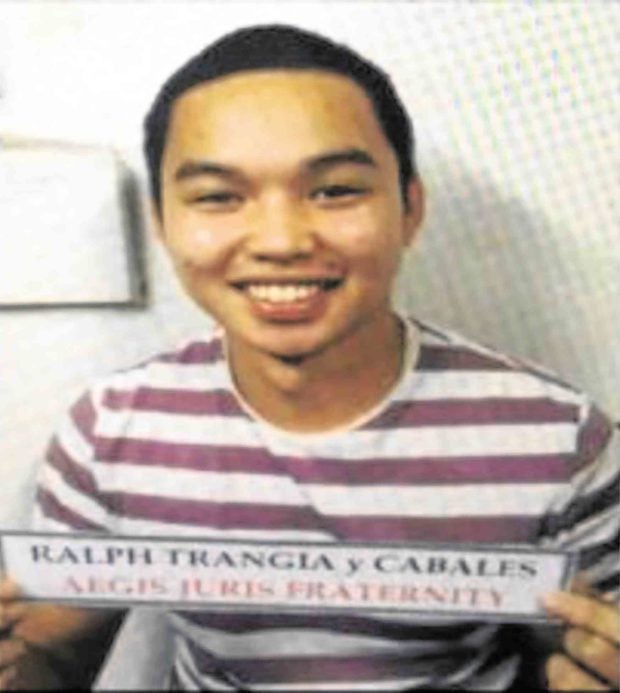 The Philippine National Police (PNP) will seek the immediate repatriation of a prime suspect in the Horacio Tomas Castillo III hazing case, whose departure from the country is being taken by investigators as a sign of guilt.

PNP chief Director General Ronald “Bato” Dela Rosa said they will ask the Interpol to help in the manhunt and the Department of Foreign Affairs (DFA) to cancel the passport of Ralph Cabales Trangia, one of the three principal suspects so far named by the Manila Police District (MPD) in Castillo’s death.

The Bureau of Immigration (BI) on Thursday disclosed that a Ralph Cabales Trangia took Eva Air flight BR 262 to Taipei, Taiwan, on Sept. 19. The plane ticket for the 2 a.m. flight was reportedly bought a day earlier.

Trangia left two days after John Paul Solano, another frat member, brought a badly bruised Castillo to the hospital, where the victim was pronounced dead, and a day before the Department of Justice issued a travel lookout order against Trangia, Solano and 14 other members of the Aegis Juris fraternity.

“We are hoping he is still in Taiwan and has not been able to move to a different country. We will ask the DFA to cancel his passport so he will become an undocumented alien in Taiwan,” Dela Rosa told reporters.

“Taiwan authorities will be forced to deliver him back to the Philippines,” the PNP chief said, adding that Trangia can be arrested upon arrival under “the doctrine of hot pursuit.”

Dela Rosa called on the rest of the Aegis Juris members on the lookout list to “have the conscience to surrender.”

Aegis Juris fraternity issued a statement on Thursday, the second since Castillo’s death, vowing to cooperate in the probe.

“Our steadfast efforts to convince our brods to submit themselves to investigation bore fruition as they express their willingness to appear,” said the group based in the University of the Santo Tomas, which was recruiting Castillo.

The group said it wanted justice for “Brod Atio,” a UST law freshman, and shared in the pain of the victim’s parents. Its silence since Monday did not mean it was reneging on its promise to fully cooperate with the police, it stressed.

Along with Trangia and Solano, also tagged by the MPD as a principal suspect was Antonio Trangia, believed to be Ralph’s father and the registered owner of the vehicle Solano used to bring Castillo to Chinese General Hospital on the morning of Sept. 17.

For the MPD spokesperson, Supt. Erwin Margarejo, Trangia’s flight was “an indication that there is guilt or that [he] is hiding something.”

“The search for evidence will continue,” he said. “There are still other persons of interest, and if we file charges Trangia’s name will still be there.”

Meanwhile, Margarejo said the MPD was still verifying screenshots of an online chat purportedly showing how Aegis Juris members planned the hazing of Castillo and how they later conspired to cover up his death.

The screenshots, posted on the Facebook page “Hustisya Para Kay Horacio (Justice for Horacio),” were circulated by an anonymous netizen on Wednesday morning. One shot had Axel Hipe, believed to be Castillo’s recruiter, reporting an “emergency” on the morning of Sept. 17, prompting another member to invoke a “code of silence.”

At the BI, the agency’s spokesperson Antonette Mangrobang said the other fraternity members on the lookout list “appear to be still in the country or we do not have enough info on their identity to ascertain if they are the same persons appearing in BI records.”

Solano had no travel record, as well as Jason Adolfo Robinos and Danielle Hans Matthew Rodrigo.

The BI said it had no record of Zimon Padro but had data for a John Zimon Padro, whose last arrival was in August 2014.