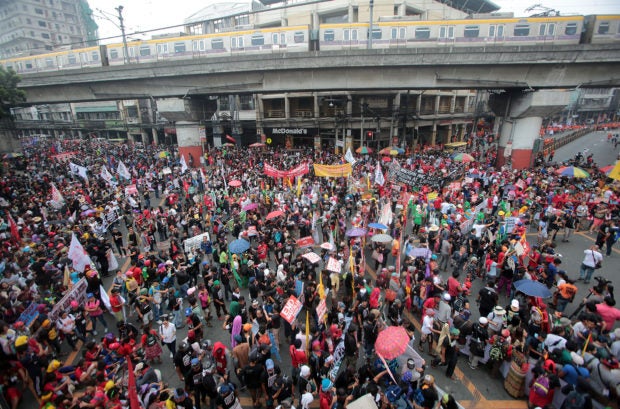 MENDIOLA RALLY Activists gather on Mendiola Bridge to denounce President Duterte in a rally marking the 45th anniversary of the declaration of martial law by the late dictator Ferdinand Marcos. —GRIG C.MONTEGRANDE

Saying even the darkest period in Philippine history brought out heroes, Lingayen-Dagupan Archbishop Socrates Villegas on Thursday urged the Filipinos to do more for real change as thousands of protesters marked the anniversary of the 1972 martial law declaration by the late dictator Ferdinand Marcos with an outcry against what they said was President Duterte’s authoritarian tendencies and his brutal war on drugs.

Mr. Duterte declared Thursday National Day of Protest to allow the Filipinos to express their frustration at the “excesses and shortcomings of the government.”

Hundreds of riot police were deployed to secure the “End Tyranny” marches and rallies in Metro Manila, the largest and angriest since Mr. Duterte took office in June last year.

Mr. Duterte has expressed admiration for Marcos several times, allowed the dictator’s remains to be buried at Libingan ng mga Bayani, and pronounced him a “hero.”

Marcos’ martial law era, which ended in January 1981, had been marked by massive human rights violations, muzzling of civil liberties and plundering of the national coffers.

According to left-wing group Karapatan, one of the organizations that took part in the rallies in different parts of the metropolis, “Duterte and his security cluster have utilized narratives and tactics straight out of Marcos’ playbook of repression, repeating and justifying rights violations, with increasing frequency and intensity.”

But the protesters warned, “Never again, never again to martial law,” in flags and placards that they carried as they marched across Manila to gather at Rizal Park for the main mass action.

“Through our protest today, we are showing the President the scale and strength of the people’s opposition to martial law,” said Santos Mero, deputy secretary general of the Cordillera People’s Alliance, which sent a contingent to the Rizal Park rally.

The President’s fiercest critics are alarmed by the former Davao City mayor’s autocratic rhetoric and his disdain for those who oppose him.

Mr. Duterte has warned he would use force or expand nationwide his martial law declaration in Mindanao if antigovernment protesters threaten public order.

He placed Mindanao under martial law to deal with a bloody siege of pro-Islamic State (IS) terrorists in Marawi City that has dragged on for nearly four months.

His allies have jailed or threatened to jail critics of his signature program, a war on drugs in which police have killed thousands of mostly poor suspects in sweeps of the slums, justified as protecting the youth against the drug menace.

“We are losing our national soul to the Father of Lies and Prince of Darkness,” Archbishop Villegas said, referring to the devil.

“They are killing the poor and poisoning our consciousness,” the outgoing president of the Catholic Bishops’ Conference of the Philippines (CBCP) said in his homily during Mass at the Cathedral of St. John the Evangelist in Dagupan City, Pangasinan province.

While martial law is confined to Mindanao, more than 13,000 people have been killed in the war on drugs, Villegas noted.

He lamented that killing the poor has become the only solution to crime, while the respectful and polite are ridiculed and the rude and ill-mannered seen as the new saints.

“Fake news abound and liars succeed to mislead and confuse. Human rights and the indigenous peoples are worth P1,000,” he said, referring to the slashing of the budgets of the Commission on Human Rights (CHR) and the National Commission on Indigenous Peoples (NCIP) to just P1,000 by Mr. Duterte’s majority allies in the House of Representatives.

(Speaker Pantaleon Alvarez has relented and agreed to restore the budgets of the CHR, NCIP and Energy Regulatory Commission.)

“We pray to stay free. We ring bells every night. We light candles. We help the orphans of the killings. But we must do more,” he said, adding that the faithful should wake up to the truth.

He stressed that the public has the right to demand change, maintaining that the people should “not relent, tolerate excuses and jokes” and demand promised change.

“Wrong is wrong and right is right. When they confuse one for the other, stand up and correct the wrong with courage but with love. Stand up. To keep quiet in the face of evil is a sin,” he said.

Villegas recalled that Marcos’ martial law era was one of the darkest periods in the country’s history.

But he praised the heroes and martyrs of that dark period who, he said, “fought darkness with light and fought evil with the power of good.”

“Stop the killings, start the healing,” students demanded in signs they put up at De La Salle University on Taft Avenue.

At least 3,000 students from schools located along the avenue and nearby areas joined thousands of other protesters from various groups in the Rizal Park rally.

Many of the students carried  pictures of three teenagers killed by police in Mr. Duterte’s war on drugs in recent weeks.

“You can bury the body but not the truth,” they said in the signs they carried protesting the killings.

“There is darkness looming over our land. We should unite to prevent this darkness,” activist Catholic nun Mary John Mananzan told the crowd at a Rizal Park rally spearheaded by the Movement Against Tyranny.

“Let us oppose the killing of our children. Stop all these killings,” she said.

Emily Soriano, who lost her 16-year-old son in the war on drugs, told the crowd President Duterte should be replaced.

“I hope we replace the President. The pain is too much. We can’t take it anymore,” she said.

At Bantayog ng mga Bayani in Quezon City for those who died and who disappeared during the Marcos dictatorship, survivors of human rights abuses shared personal experiences.

At the CHR compound in Quezon City, the agency’s chief, Jose Luis Martin Gascon, told reporters democracy was not yet lost under the Duterte administration.

“The courts and our legislative bodies are still running, and we can still take collective action,” Gascon said.

The rallies in the provinces were also peaceful, with thousands of protesters marching in urban centers in Luzon, the Visayas and Mindanao.

Mr. Duterte was not burned in effigy in his hometown of Davao City, but the protesters denounced his bloody war on drugs.

In Cagayan de Oro City, protesters from the provinces of Misamis Oriental and Bukidnon staged a rally at Magsaysay Park, and in Baguio City representatives of civic groups, teachers and students tackled martial law in a forum held at Saint Louis University.

In Bicol region, thousands of protesters from the militant groups Bayan, Piston, Gabriela, Karapatan and Anakpawis vowed to oppose a reimposition of martial law in rallies in Legazpi City and Naga City.