Former solon: No justice if Marcoses not held accountable for martial law 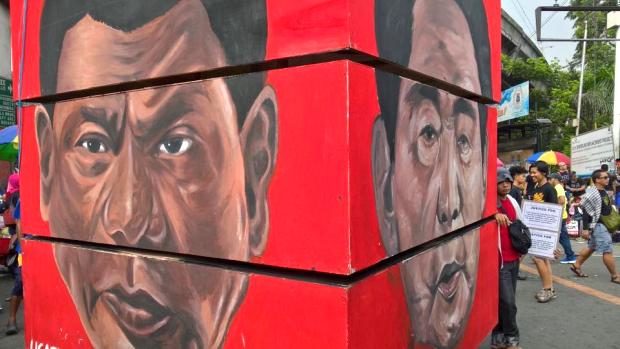 Some of the protesters in Manila carried this cube placard showing the faces of Presidents Rodrigo Duterte and Ferdinand Marcos as they marched towards Rizal Park on Thursday, Sept. 21, 2017. (Photo from Gabriela)

There can be no justice without the Marcoses being held accountable for the horrors of martial law declared on Sept. 21, 1972, by then President Ferdinand Marcos.

Former Bayan Muna Rep. Neri Colmenares, a human rights lawyer, urged the public not to settle with the Marcos family as long as they had not owned up to the horrors of martial law under the late strongman.

Speaking on Thursday at a massive rally along Roxas Boulevard near the Rizal Monument, he compared his experiences when he was detained during the Marcos regime to today’s situation.

He was one of many personalities who rallied the crowd at the Luneta, which organizers claimed had swelled to 30,000.

The Sept. 21 protest was to remember the 45th anniversary of the declaration of martial law by Marcos.

Protesters also took to the streets to slam the spate of extrajudicial killings linked to President Rodrigo Duterte’s war against illegal drugs.

Rain did not scare away the protesters, both from the older set and the millennials, who simply brought out their umbrellas or any cover against the rain.

Colmenares likened the situation to what happened during martial law under the Marcos regime, stressing that military rule was creeping in again with martial law already imposed in Mindanao.

“Let us fight, all of us, together against President Duterte’s martial law,” he added.

The protest – which was originally scheduled to be held near the Quirino Grandstand – ended up being held right along Roxas Boulevard, blocking the street entirely.

As expected, millennials exhibited the Filipino ingenuity for playing with words in expressing their sentiments.

Even though hand-written, their placards had eye-catching with slogans like: “Stop Du30ranny now!” – a reference to a play on the President’s surname.

Another youngster held up a sign that read: “Never forget bagets!” as if to remind the younger set not to let another martial law regime take place.

Amusingly, another millennial had a unique way of telling her parents her whereabouts: “Dad uwi ako before 10 pm. Laban lang me para sa bayan.”

Even little kids and animals took part in the rally.

“Better to start them young,” said Abegail Lascana, who took her 7-year-old daughter Yunice to the event.

Clad in black shirt and leggings, Yunice was holding a placard, saying no to martial law.

“My mom said we should learn how to fight for our rights and freedom,” she said when asked why she went with her mother to the protest action.

Some dogs were also made to carry placards by their humans.