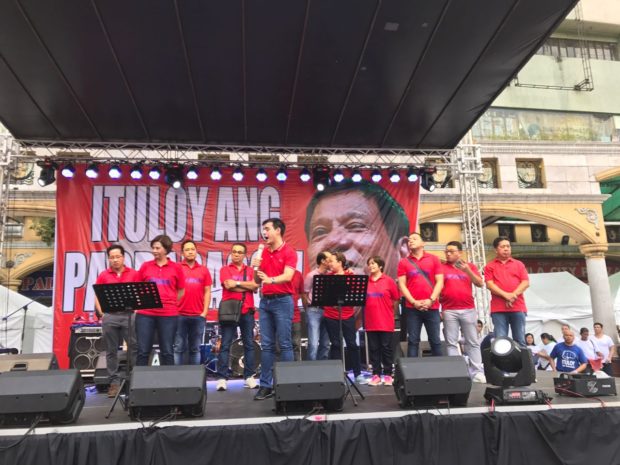 Several personalities, from the government officials to celebrities, took part in the Plaza Miranda rally meant to support President Rodrigo Duterte and his programs, particularly his controversial anti-illegal drug campaign.

Government officials including Labor Secretary Silvestre “Bebot” Bello III, Energy Secretary Alfonso Cusi, and Manila Vice Mayor Isko Moreno joined the thousands of Duterte supporters that flocked to the historic plaza in Quiapo, Manila to fully back the President amid the backdrop of mounting criticisms against his bloody crackdown against drugs.

Moreno said he did not vote for Duterte because he supported Poe but nonetheless supported the President as the “people have spoken.”

Others include whistleblower Sandra Cam, actress Katya Santos, actors Dennis Padilla and Gary Lim, comedians Ate Shawie and Ate Zsashing, who did a bit of stand-up comedy to entertain the crowd.

In a brief interview with INQUIRER.net, Ate Shawie said she and Ate Zsashing went freely to the event to show support to Duterte.

“Naniniwala kami kay (We believe in) President Duterte,” she said.

The police said that as of 3 p.m., around 10,000 pro-Duterte rallyists from different Metro Manila cities and nearby provinces converged at the plaza.

The rain did not prevent the attendees from staying, as they covered themselves with the tarpaulins they carried when they arrived early in the afternoon.

The organizer of the event, Subic Bay Metropolitan Authority Director Benny Antiporda, said that the program was “free-for-all,” and did not specify how long the program would last.

The rally was completely set up with stage propped with LCD screen, and lights and sounds, with a tarpaulin background printed with the call “Ituloy ang Pagbabago” (Continue change) and the face of Duterte. /je