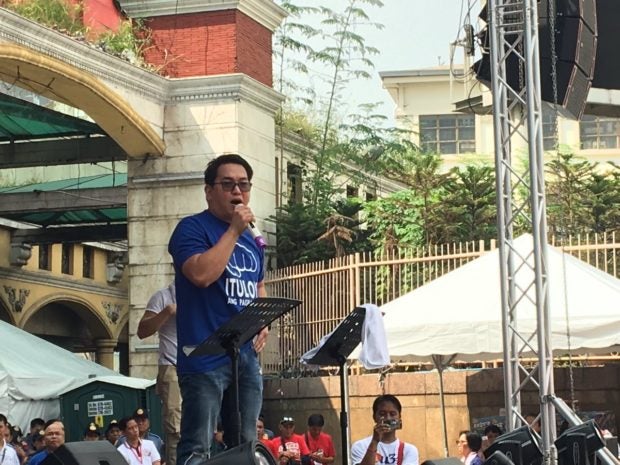 A partylist lawmaker lauded on Thursday the deaths under the Duterte administration’s brutal war on drugs as he called on the critics of the administration “not to destroy the care being shown” to the nation by President Rodrigo Duterte.

During the “Ituloy ang Pagbabago” rally held at the Plaza Miranda, Acts-OFW party-list Rep. John Bertiz even attributed the eradication of the “tanim-bala” scam that has victimized a number of overseas workers to the drug war.

“There’s no more bullet-planting [in the airports] because all of the bullets are in the bodies of drug users and peddlers,” Bertiz said.

Since Duterte came to power in July, thousands of suspected drug users and peddlers have been killed by either police or vigilantes.

The administration’s drug war, though, has also led to the deaths of innocent children. Most recently, Kian delos Santos was killed by Caloocan police, who alleged that he was a drug runner who fought it out with them.

Footage, however, belied the police’s claim.

Because of the incident, Delos Santos’ mother Lorenza was forced to leave her job in Saudi Arabia to mourn for her child.

Another teenager, Carl Angelo Arnaiz, was also killed by Caloocan police after he supposedly robbed a taxi driver and fought it out with police. Taxi driver Tomas Bagcal would later retract his earlier statement and said that Arnaiz’s killing was “staged.”

Like Lorenza, Arnaiz’s mother Eva was also forced to leave her job in Dubai to attend to her son, who had been missing for days before they found his body in a morgue.

Lorenza and Eva are just two of the millions of overseas Filipino workers supposedly represented by Bertiz.

Despite the thousands who have died in the antidrug campaign, Bertiz said that it should continue.

“Let us not destroy the care being shown by the President,” he said. /idl