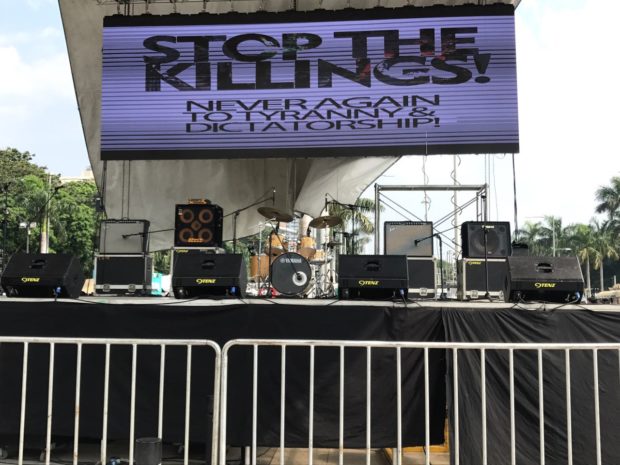 “STOP THE KILLINGS! NEVER AGAIN TO TYRANNY AND DICTATORSHIP!”

These bold letters were written in a huge television screen installed on stage at the historic Luneta Park in Manila on Thursday.

The stage was set for protest actions scheduled at 5 p.m. this Thursday, which was expected to draw thousands of people protesting the growing number of killings in the country.

The rally was organized by the group called Movement Against Tyranny (MAT).

Two hours before the scheduled rally, a number of rallyists could already be seen preparing for the event with some tarpaulins and posters either posted on a wall or lying on the grass.

De Lima, a staunch critic of the Duterte administration, has been detained at Camp Crame in Quezon City for alleged involvement in illegal drugs, an accusation she has repeatedly denied.

READ: Under Duterte, injustice and impunity the ‘new normal’—De Lima

“Philippines, where do we go from here?” one poster reads.

“Mox,” a member of Free Leila Movement, was wearing black t-shirt with the message: “Prayer Batallion for Truth and Justice.”

Mox, who refused to give his full name, said some 500 members of the group were expected to attend the rally.

Former Congressman Teddy Casiño was among the first personalities spotted at the venue. /idl 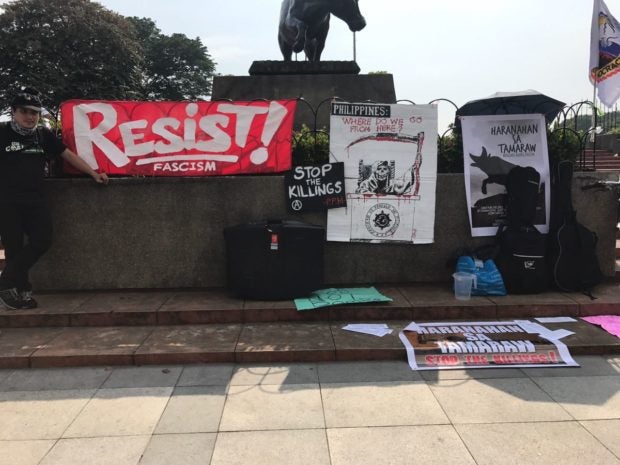 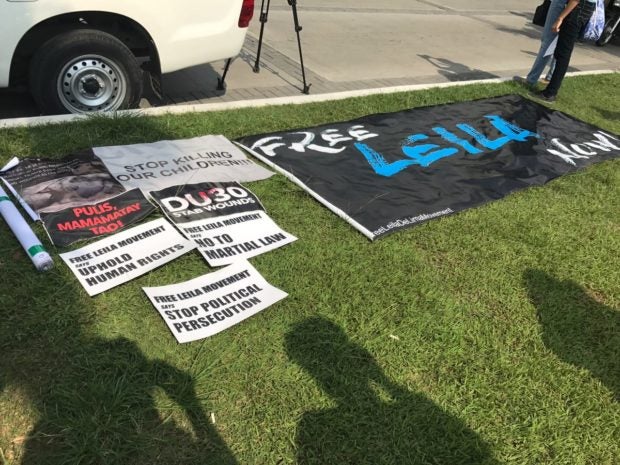 Read Next
Pro-Duterte groups: No competition with anti-administration protesters
EDITORS' PICK
OVP: Pilot’s claim vs Robredo ‘never happened’, a ‘malicious fabrication’
Honolulu Café is the cure for your Egg Tarts and Roastings cravings
Petition to reverse Comelec decision on Bongbong Marcos’ DQ case reaches SC
PH detects local transmission of Omicron subvariant BA.2.12.1
House energy committee chair Arroyo bats for cheap electricity
Luxe property: A way to build, preserve wealth
MOST READ
Heart Evangelista gets a ‘no’ from Chiz Escudero after asking, ‘Do I deserve a bag?’
Man posing as Marcos spox revealed to be an inmate in Bilibid — Guevarra
CebuPac places pilot under disciplinary review after ‘baseless’ post vs Robredo
Closure order vs Megaworld Corp halted as firm vows cooperation with BIR – exec
Don't miss out on the latest news and information.