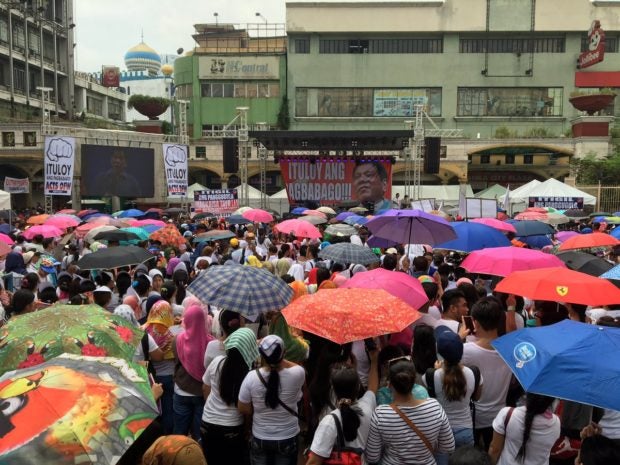 Busloads of government workers and barangay volunteers trooped to the Plaza Miranda on Thursday to show their continued support for President Duterte amid protests against him and his administration’s purported creeping authoritarianism.

By noon, the Inquirer had seen at least six buses drop off hundreds of government workers and volunteers from the cities of Valenzuela, Caloocan and San Jose del Monte.

Malacañang suspended classes in public schools and work in government offices after Duterte declared Sept. 21 as the National Day of Protest.

Police counted some 1,400 Duterte supporters at Plaza Miranda as of 11 a.m. The Land Transportation Franchising and Regulatory Board said that it issued special permits to 22 buses and 20 vans to serve as shuttle service today.

Tina, a street leader from Valenzuela’s Barangay Marulas, said that they went to Plaza Miranda “voluntarily” to express their support for the administration’s policies, particularly the war on illegal drugs.

While she expressed alarm over the thousands of deaths in the war on drugs, Tina said those killed in their barangay “were really drug users and peddlers.”

Since the gathering coincided with the 45th anniversary of the imposition of martial law, Tina reminded the youth attending the rallies “to know what really happened” during the dictatorship.

Most of the attendees from Caloocan and San Jose Del Monte wore shirts showing their support for the country’s shift to a federal form of government.

Those who came from Caloocan said that they were part of their respective barangays’ antidrug groups.

On the other hand, those from San Jose del Monte said that they were barangay volunteers, but when asked by the Inquirer what sort of work they do, a woman who refused to give her name said, “like this.”

Benny Antiporda, Subic Bay Metropolitan Authority board member and one of the organizers of the Plaza Miranda gathering, said their event was meant “to show the truth.”

Asked what that truth was, Antiporda said, “That many are happy [with the government’s policies], and that only a few are complaining.”

Antiporda, who stressed that he came to Plaza Miranda as a private citizen, said that Malacañang had no hand in their event, which is expected to be attended by Energy Secretary Alfonso Cusi.

The Plaza Miranda event was organized by the President’s party, Partido Demokratiko Pilipino-Lakas ng Bayan, and by groups that helped the President in the 2016 campaign such as the Mayor Rodrigo Roa Duterte-National Executive Coordinating Committee and Digong Duterte Supporters. /cbb