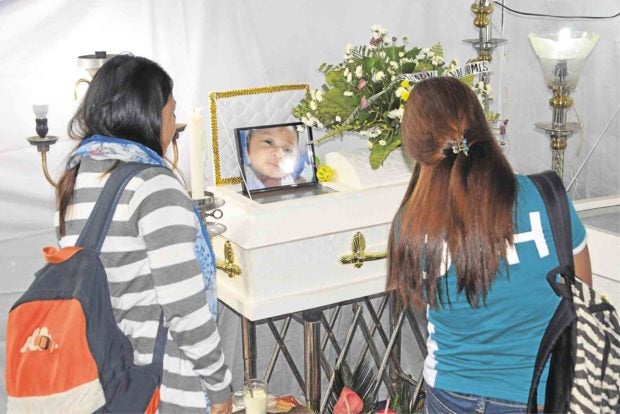 Rural health workers view 5-month-old Rex Jude Laride in his coffin during the wake for the entire Laride family in Tubod, Lanao del Norte. They came to visit on Thursday, the day Rex Jude was to get his vaccine shot. —DIVINA M. SUSON

TUBOD, Lanao del Norte — Health workers kept their appointment on Thursday to be at the house of the Laride family here supposedly to administer a vaccine shot to 5-month-old Rex June Laride and conduct prenatal checkup on his mother, Virginia.

But it was not to deliver health service but instead attend the wake for the entire Laride family, who were killed during a police antidrug operation on Sept. 11.

One of the health workers, Lovely Alandroque, stood before Rex June’s coffin, trying to prevent herself from crying.

“Today he was supposed to get his vaccine shot,” Alandroque said. “It’s a pity. He was a healthy child,” she said.

She said Virginia, Rex June’s mother, was also scheduled to have her first prenatal checkup on Thursday.

Rex Jude and Virginia, 35, and pregnant, were killed in a police operation in the village of Taguranao here that supposedly targeted Rex Jude’s father, Bevino, 32.

A report of the town police said the operation was for the arrest of Bevino for frustrated murder.

The arresting team returned fire and killed Bevino, along with his wife and baby.

But it turned out that the frustrated murder case against Bevino had already been dismissed in August.

When this was pointed out by reporters to the police, Senior Supt. Leopoldo Cabanag, Lanao del Norte provincial police director, said the arresting team was actually after Junel Laride, a brother of Bevino.

“He is reported to frequent that house and during the particular operation, he was said to be there,” Cabanag added.

Asked why Bevino’s baby and wife were also killed in the raid, Cabanag said he was sorry.

“It was not intentional. Our operation was legitimate,” he said.

The Tubod police also insisted that Bevino fired a gun. A Carbine rifle was supposedly recovered in the Laride house after the gunfight.

Cabanag said police were only acting in self-defense.

“It was not brutal,” he said of the entire family’s killing.

‘They killed them all’

“It was really painful they ended up like this,” Jocelyn said as tears rolled down her cheeks.

She said the family was asking President Duterte to help them find justice. “They killed them all. No one was left of my brother’s family,” Jocelyn said.

Cabanag, the Lanao del Norte police chief, said the case was being investigated although the operation was presumed to be legitimate.

Eight members of the Tubod police force, including its acting chief Donor, are now in restrictive custody, said Cabanag.

“I am publicly apologizing for what happened but I believe it was not the intention. I hope the public understands it,” Cabanag added. —Divina Suson