Jinggoy granted bail by Sandigan, will be free today 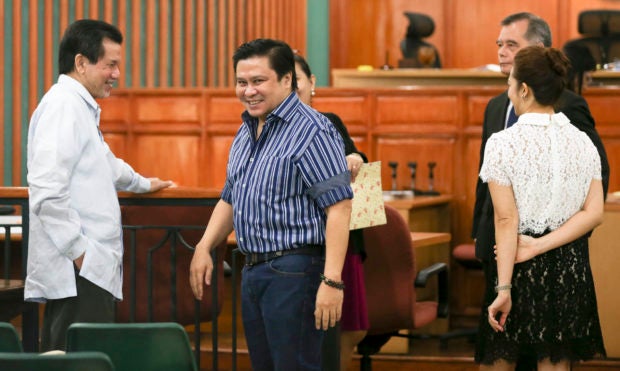 Detained former Sen. Jinggoy Estrada is poised to be released on Saturday once he posts bail of P1.33 million for his plunder and graft cases in connection with the pork barrel fund scam pending at the Sandiganbayan.

A Sandiganbayan source confirmed on Friday that the Fifth Division had granted Estrada’s second bail petition, but no copy of the resolution was made available to reporters.

Bail was set at P1 million for the plunder charge, and P30,000 for each of the 11 counts of violations of the Anti-Graft and Corrupt Practices Act, the source said.

The source said the court’s resolution was transmitted on Friday afternoon to Estrada’s camp in his detention cell at the Philippine National Police headquarters.

The resolution denied Estrada’s motion to dismiss “for lack of merit.”

The court said it reconsidered and set aside its earlier ruling dated Jan. 7, 2016, to grant bail to Estrada.

The dispositive portion of the ruling showed that the Sandiganbayan justices were split 3-2 in deciding Estrada’s bail petition, with affirmative votes from Associate Justices Maria Theresa Mendoza-Arcega, Reynaldo Cruz and Lorifel Pahimna, who was the swing vote.

The Sandiganbayan will open its offices on Saturday with a skeletal staff to receive Estrada if or when he posts bail.

Estrada’s bail petition was denied by the court on Jan. 7, 2016, and his appeal was again denied on May 11, 2016. But Estrada filed on Sept. 12, 2016, an “omnibus motion” to post bail, citing insufficiency of evidence and humanitarian grounds.

In his omnibus motion, Estrada argued that the prosecution failed to prove that he was the principal in the pork barrel scheme, citing the Supreme Court decision that dismissed former President Gloria Macapagal-Arroyo’s plunder case due to the failure to prove the “corpus delicti.”

Estrada said that assuming the allegation that he pocketed P183.79 million was correct, the threshold amount of P50 million would not be met because the P183.79-million kickbacks would have to be divided among the four main accused in the case.

This means that the former senator’s alleged kickbacks would amount to only P45.9 million—short of the P50 million threshold for plunder, Estrada contended.

In the same motion, Estrada, a son of former President and now Manila Mayor Joseph Ejercito Estrada, maintained that he was not a flight risk.

The family of Estrada arrived on Friday afternoon at the PNP Custodial Center ahead of the former lawmaker’s impending release.

Precy told reporters she had not seen a copy of the resolution by the Sandiganbayan Fifth Division granting her husband bail while the Estrada children expressed excitement over their father’s anticipated release.

Estrada has been detained at the PNP Custodial Center since his indictment in 2015 for plunder and 11 counts of graft in connection with the alleged misuse of P183 million in pork barrel funds.