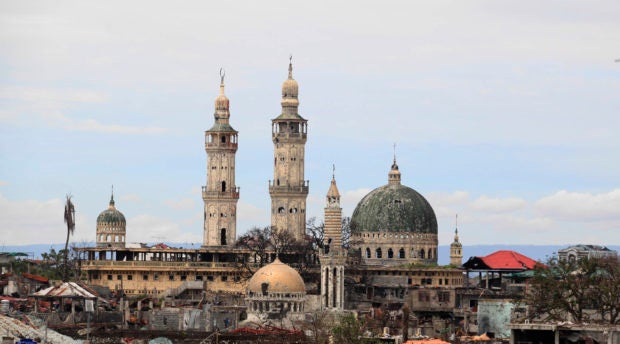 MARAWI CITY—Surrendering gunmen will not be shot but will be treated humanely if they free their hostages.

The military on Friday made this guarantee as it intensified its campaign to convince the remaining members of the Islamic State-inspired Maute fighters and their allies to surrender.

“They have to free their hostages. If they will surrender, we will not shoot them. That’s our arrangement,” Col. Romeo Brawner, Joint Task Force Marawi deputy commander, told the Inquirer.

Between 40 and 70 gunmen remain in a section of Marawi, trying to fight off advancing troops whose campaign to retake this capital city of Lanao del Sur is approaching its fourth month, according to government reports.

Brawner said the military had turned to text messaging, public address system and social media to reach out to the gunmen and convince them to lay down their weapons and free their hostages.

He said gunmen who wanted to surrender could call the hotline number being circulated in the city or send text messages.

A few weeks back, Omar Maute, one of the top terrorist leaders here, reportedly asked the military to provide him and his allies free passes in exchange for the freedom of the hostages,  including Catholic priest Fr. Teresito Suganob.

But President Duterte flatly rejected the proposal during his visit to Cagayan de Oro City on Sept. 10.

“No way. No way,” the President said, adding that the only way Maute gunmen could get out of the conflict zone alive was to surrender.

“This has to end. This cannot go on. If they surrender, we will … give them due process, provide them with a lawyer,” he said.

“There will be no oppression or harassment or anything. No violence will be inflicted upon them if they surrender. That I could guarantee you,” Mr. Duterte added.

Brawner reiterated the President’s position but said the air strikes and ground assaults on the remaining gunmen would be without letup.

“We are very careful not to hit any of the civilian hostages,” he said.

Brawner said 148 soldiers and policemen, some 660 militants and 45 civilians had died in the fighting that started on May 23, when Maute and Abu Sayyaf gunmen and their allies took over sections of Marawi.

He said government forces had pushed Maute fighters out of many areas inside the main battle zone in the city, with the fighting now closer to Lake Lanao.

“We have reduced their maneuver space. This is our final push. We have to concentrate whatever personnel, whatever capability we have here,” Bautista said.