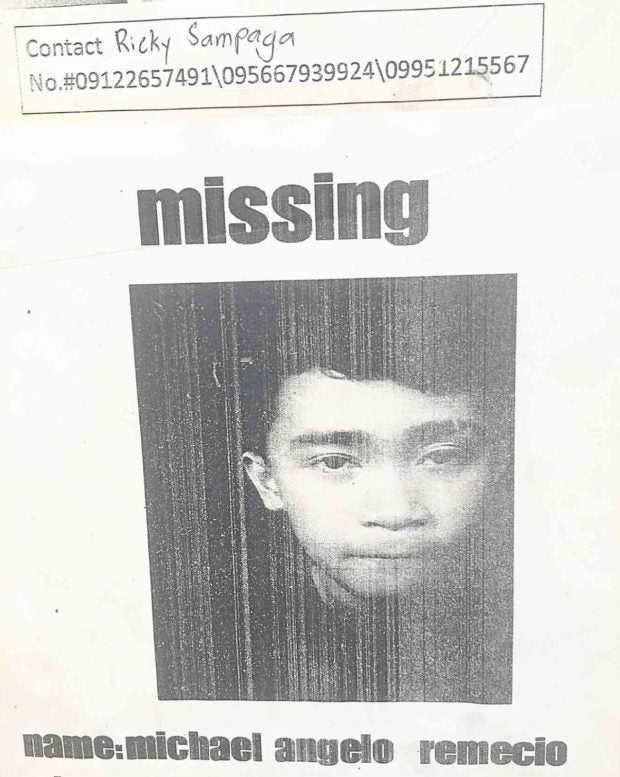 The parents of a 16-year-old boy who has been missing for nearly three weeks are certain that a decomposing body found in a stream in San Jose del Monte, Bulacan, is that of their son, Michael Angelo Remecio.

Remecio’s mother, Genevie, 39, said he left their house in Barangay 176, Caloocan City, at 9 p.m. on Aug. 25, hoping to make some money by driving a tricycle. When he failed to come home, she filed a missing persons report with barangay officials on Sept. 1.

At 3:20 p.m. Wednesday, a male body was found in a stream at Evergreen Subdivision, Barangay Gaya-Gaya in SJDM by scavengers who noticed a foul smell.

The body was in such a bad state, making it impossible to make out any identifying marks or features, SPO1 Edcel Israel, commander of SJDM’s Police Community Precinct 2, told the Inquirer on Thursday.

The only thing they were certain of was that the victim was male. He was wearing a black shirt and basketball shorts and his hands had been tied together with a nylon cord.

When Genevie and her husband, Dionisio, learned about the discovery, they went to Bulacan that same afternoon and through the clothes on the body, positively identified him as their missing son.

Israel said it was possible that the body was dumped elsewhere and carried downstream by the current, only to surface after floods caused by Tropical Depression “Maring” subsided. He confirmed that the stream where the victim was found passes through Caloocan City.

Should the body be proven to be Remicio’s, he would be the third teenager killed under mysterious circumstances in Caloocan City last month after 17-year-old Kian Loyd delos Santos and 19-year-old Carl Angelo Arnaiz.

For now, the body remains at a funeral home in SJDM pending the results of an autopsy and a DNA test.

Remecio’s parents said they could not think of a possible motive for their son’s killing as Genevie described him as a selfless, helpful teenager who enjoyed making friends.

“He became a tricycle driver because he wanted to help us,” she told the Inquirer.