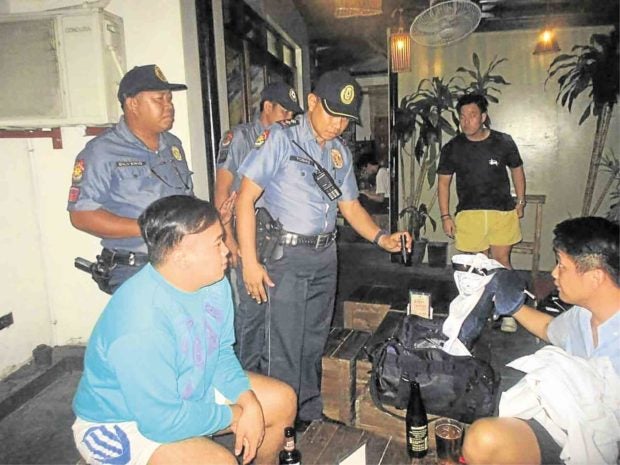 A QCPD team conducts “Oplan Bakal” inside one of the bars near Katipunan Avenue on Wednesday night. —Contributed photo

Surprise inspections conducted by the Quezon City police in at least three bars near Katipunan Avenue on Wednesday night raised alarm among frequent customers  in the area.

But Chief Supt. Guillermo Eleazar, director of the Quezon City Police District, was quick to allay such fears and maintained that the inspections were part of regular operations.

Eleazar explained that what his men did was “no different” from the routine bag inspections done by security guards in malls or office buildings.

Anxious netizens turned to social media to report the presence of policemen in the bars, noting how they opened and inspected the bags of customers.

Ena Escañan, a part-time lecturer at Ateneo de Manila University, was inside one of the bars around 11:30 p.m. when a waitress asked her and her friends if “some policemen can go up and do an inspection for guns.”

In an interview with Inquirer on Thursday, Escañan said at least six policemen entered the bar, most of them staying by the staircase. There were at least 12 people in the bar at the time, including the owner.

“One officer went to our table and asked if he could check my bag for guns,” she said. “I stood up, picked up my bag, put it on the table and opened it.” The policeman, who used a flashlight to inspect the bag, also mentioned that they were looking for drugs.

The policemen were “in and out in under 5 minutes. The (bar) owner thanked us for complying. He also said that this was not the first time this happened.”

In an interview, Eleazar said the team from Anonas station went to the bars to conduct “Oplan Bakal,” which is similar to “Oplan Galugad” and “Oplan Sita.” Galugad is a search operation done in communities while Sita focuses on motorists, particularly motorbike riders.

“We have been doing this for a long time, where we go into clubs, turn on the lights and announce the operation,” he said. “Before you enter these establishments, like malls, security guards check your belongings… This operation is no different.”

The QCPD chief also pointed out that consultative meetings had been held with barangay officials and local business owners who requested the continuation of Oplan Bakal in their areas. A representative of Ateneo de Manila University, a campus along Katipunan Avenue, attended one of those meetings, he added.