Lannie, Maring out of PAR as early as Wednesday afternoon, says Pagasa 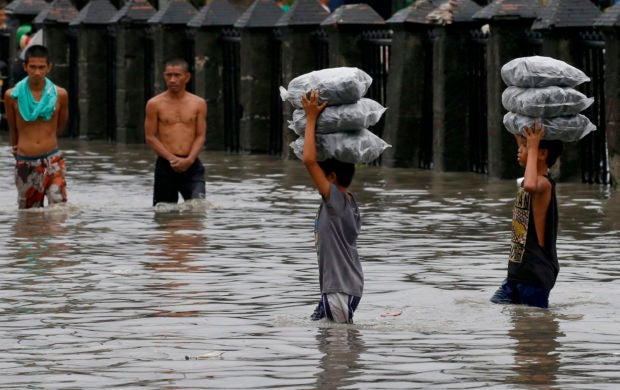 Residents wade through the floods as they go on their daily business after overnight rains brought about by tropical depression “Maring”, inundated low-lying areas Tuesday, Sept. 12, 2017 in Bacoor township, Cavite province, south of Manila, Philippines. The tropical depression has dumped heavy rains in the Philippines, flooding metropolitan Manila and nearby provinces and causing a landslide that killed two brothers. (AP Photo/Bullit Marquez)

Weather forecaster Nico Peñaranda said in a briefing that sea travel remained risky over the western section of Central and Southern Luzon as Maring intensified at sea while on its way out of PAR.

Maring was last spotted 370 kilometers west of Iba, Zambales, with maximum sustained winds of 85 kilometers per hour (kph) and gusts of up to 105 kph, according to the Philippine Atmospheric, Geophysical and Astronomical Services Administration (Pagasa).

BACKSTORY:  All storm signals lifted as ‘Maring’ moves away from PAR

Maring swamped parts of Calabarzon, National Capita Region and Central Luzon with its heavy rains, prompting the suspension of government work and classes, as well as cancellation of several domestic flights.

Typhoon Lannie, meanwhile, has changed its track and was heading towards Ryukyu Islands in Japan instead of Taiwan, Peñaranda said.