Gordon believes Trillanes should be kicked out of Senate 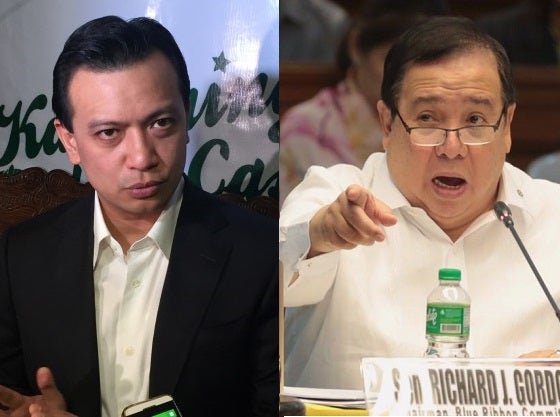 The word war between Sens. Richard Gordon and Antonio Trillanes IV has taken a turn for the worse.

Gordon, chair of the Senate blue ribbon committee, is openly calling for the ouster of Trillanes from the Senate for his “out of line” behavior.

“I don’t think he belongs in the Senate,” he said in a television interview on Tuesday.

In response, Trillanes said in a text message that Gordon could just “fantasize” and “whine” that he would end up being ejected by the Senate.

He said Gordon wanted him expelled from the Senate “because his political master, (President) Duterte, wants that, too.”

“But he can only fantasize and whine about it because it’s not gonna happen,” Trillanes said.

READ: Trillanes confident he will not be expelled

At the Aug. 31 hearing, Trillanes accused Gordon and Sen. Tito Sotto of lawyering for Davao City Vice Mayor Paolo Duterte, a son of President Duterte, and Manases Carpio, a son-in-law of the President.

The younger Duterte and Carpio had been linked to the so-called “Davao Group,” which allegedly facilitates smuggling at the Bureau of Customs (BOC) for a fee. The two men have denied being part of the group.

Asked in the TV program if he believed Trillanes should be expelled, Gordon answered: “I think so. You don’t call people names. You don’t insult your teammates.”

“That’s why we say, ‘Will the gentleman yield to a few questions?’ You don’t address the guy, you address the chair. There are rules. He doesn’t know his rules that’s why he goes up to the deep end,” he said.

“And when that happens, what do you have? A mob. You cannot have a mob in the Senate. People are expected to act in a certain way,” he added.

In his complaint, Gordon said Trillanes engaged in “unparliamentary acts and uttered unparliamentary language and exhibited disorderly behavior” that caused “damage to the Senate and to the people” during the Aug. 31 hearing on the drug shipment that went past the BOC.

Calling the blue ribbon committee a “comité de absuelto,” according to Gordon, is a violation of Article 358 of the Revised Penal Code for oral defamation or slander, and of the Rules of the Senate.

It noted Trillanes’ branding of the Senate as “one of the most damaged institutions in the government” with most of its members afraid of going against the Duterte administration.

On Monday, the ethics committee found the Gordon complaint sufficient in form and substance.

On Tuesday, Trillanes expressed confidence that his fellow senators knew that there was nothing unparliamentary about his actions and language in that hearing.

“I may be passionate and serious in my demeanor sometimes but I never went outside the rules of the Senate,” he said. “Gordon just can’t accept the fact that somebody stood up to him and put him in his place.”

Trillanes dismissed as “petty” Gordon’s move to have him expelled from the Senate.

“He wants to show (the President) that he is the most loyal senator in the Senate and that’s why he is willing to do this. But the other senators will go along with him? I think not,” he said.

Trillanes said his lawyers were preparing to file an ethics complaint against Gordon “probably a week or two from now.”