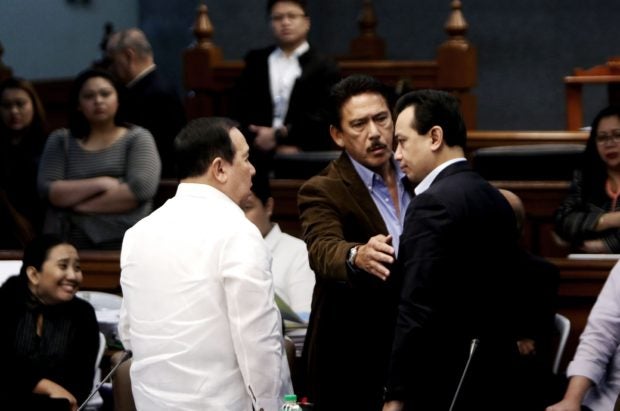 The Senate ethics committee on Monday found the complaint against Senator Antonio Trillanes IV as sufficient in form and substance, except for the inclusion of his involvement in a coup d’etat attempt in the past.

Minority Leader Franklin Drilon questioned the inclusion of the coup in the complaint, noting that Trillanes was not a senator when he committed the act.

Senator Vicente Sotto III, the ethics and privileges committee chair, said they will ask Trillanes to submit a counter-affidavit within 10 working days, to be followed by Senator Richard Gordon’s reply within five days.

Gordon said Trillanes engaged in “unparliamentary acts and uttered unparliamentary language and exhibited disorderly behavior,” which was “causing damage to the Senate and to the people.”

Sotto said they would call for a full-blown hearing with Gordon and Trillanes present if the panel deemed it as necessary.

“If we can, if necessary, we will call on a full-blown hearing with the two present, if the members will so desire. Pwede rin we can decide based in the affidavits and counter affidavits that would be submitted,” Sotto said in a separate interview, adding that the panel would try to resolve the complaint within two months.

The ethics committee chair also noted that the possible penalties would be reprimand, suspension or expulsion, if the case was not dismissed.

Sotto also cited the Senate rule on unparliamentary acts and language, insisting that senators should be impeccable with their words.

The ethics chair also agreed that it would be better if Gordon and Trillanes would settle the complaint amicably.

“If you ask me as chairman of ethics, mas gusto ko maareglo nalang ‘yan, less work for me,” said Sotto. je