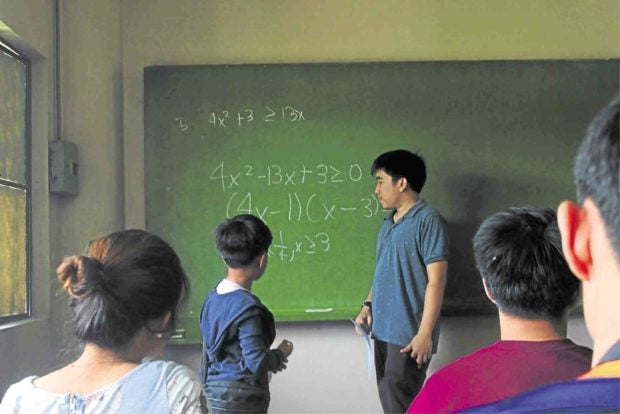 Every Friday, students of the University of the Philippines (UP) Diliman steel themselves for the last classes of the week. For most sophomore engineering and math majors, one of the day’s toughest hurdles is Math 54 — advanced calculus.

Joining them is 8-year-old Io Aristotle Nikolai Calica, who shows up with a notebook that has Superman on the cover, doodles on the margins, and penciled solutions for the square roots of one to 500 million on the pages.

As the professor conducts the lecture, the Grade 3 student would take part in the discussion in a tiny yet assertive voice. “R = -2; the equation graphs a line, not a ray,” he recites, much to the astonishment of classmates more than twice his age.

The math wizardry that amazes them just comes naturally to Calica, who has been doing complex mathematics since he was 5 years old. Born to UP Clark professors Ianne and Melissa of Balanga, Bataan province, Io is considered a gifted child whose talent also extends to music.

But outside his precocious pursuits, Io can be just another boy with a big  smile, given to occasional antics and wacky ideas. He wants to be a mathematician and a concert pianist when he grows up, but “I also want to be the first to plant mung beans on Mars.” 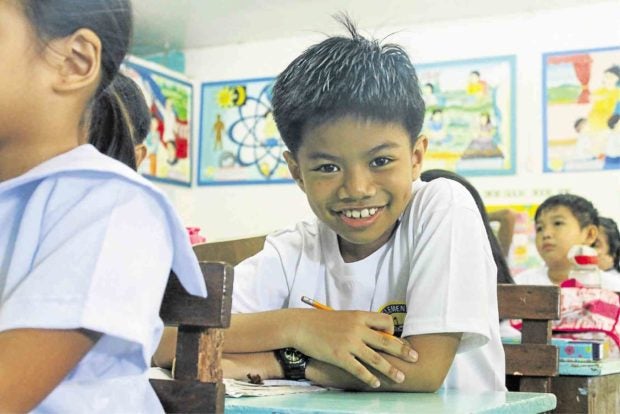 Io Aristotle Nikolai Calica wows college students more than twice his age, but remains a kid with a big smile, a bag of antics and wacky ideas.

Named after one of Jupiter’s moons, Io began showing numerical skill and an impressive memory at age 2, when he could already count from one to 100 and correctly identify around 20 national flags.

At age 3, he could already solve two 240-piece jigsaw puzzles simultaneously without the help of his parents, who by then started to take a more serious look at the exceptional mind growing before their eyes.

“Math is not just strictly computation, though that is certainly one aspect of it. But at its heart is the ability to recognize patterns,” said Ianne, who is currently doing Ph.D. coursework for math in UP.

At first, however, they thought Calica was just a hyperactive kid.

“When he was 6, we had him undergo a series of tests under Dr. Leticia Ho (a clinical neuropsychologist and founder of the Philippine Center for Gifted Education in Manila). When the results came out, it was revealed that Io had computational skills of a 19-year-old,” Melissa said.

The tests also concluded that Calica had superior memory, problem-solving and pattern-recognition skills far beyond his age group, Ho told the Inquirer. 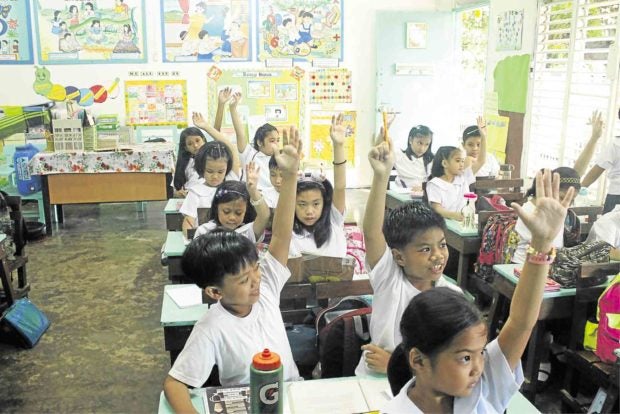 Io starts his school week at Balanga Elementary School in Bataan and ends it at UP Diliman. Still, “no pressure” for the math prodigy, according to parents Ianne and Melissa. —PHOTOS BY KRIXIA SUBINGSUBING 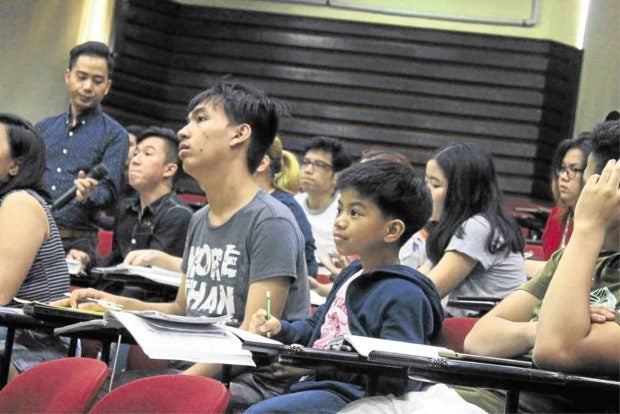 “[His development] is what we call asynchronous, in that his cognitive skills far outweigh his physical age. It also means that while Io is gifted mathematically, he is normal in other aspects, emotionally and mentally,” she said.

She recommended that Calica be exposed to other interests other than math. The boy turned out to be extremely talented in music as well, and can play the piano, guitar and violin. For piano, he is currently under the tutelage of former UP College of Music Dean Mauricia Borromeo.

At 5, Calica discovered chess through his father, a chess varsity player during his high school days.

In less than a week, Calica mastered chess notation and memorized the famous moves of grandmasters Magnus Carlsen and Bobby Fischer. He particularly reveres the latter, saying his favorite play was the “Game of the Century,” where the  13-year-old Fischer defeated 26-year-old Donald Byrne after 41 moves.

As a kindergartner, Calica became the youngest chess player in the 2014 Central Luzon Regional Athletic Meet—the first of several other chess achievements. He also competed in several math and music contests, some of them held abroad, bringing home a total of 30 medals and seven trophies so far.

Calica also breezed through his lessons at Kumon Learning Center in Balanga, where he reached 14 levels of math courses in eight months. Once he takes the final exam this year, the 8-year-old could become one of the youngest Kumon graduates, according to his instructor, Ernani Paeldon.

That was how the Calicas found themselves in UP.

“Io has already progressed beyond the available coursework in Kumon, and he likes to be challenged or else he gets bored. So Dr. Ho suggested that we bring him to UP to find him a tutor,” Melissa said.

Together, they pulled some strings, so to speak, so Calica can sit in college algebra and calculus classes every Friday.

Unlike the regular students, Calica does not have to submit outputs for grading and evaluation, said Dennis Leyson, assistant professor and Math 54 lecturer.

“But whenever I ask questions, especially those that relate to algebra and calculus fundamentals, he is able to answer. That’s how I know he can keep up with the lessons,” he said. 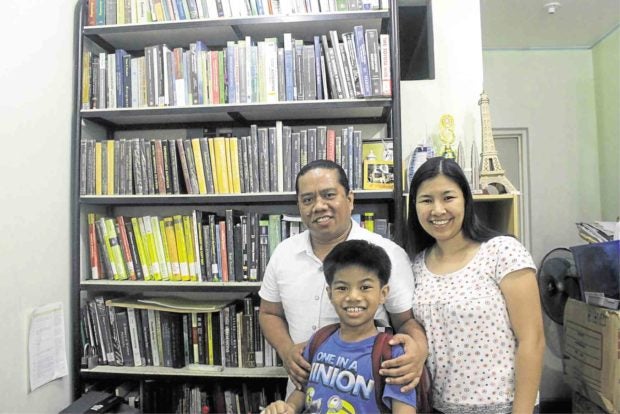 At age 8, precocious boy has earned a seat in tough Math class in UP Diliman

Even his Math 54 classmates were awestruck.

“At first we were skeptical that he really understands our lessons, we just thought it was cute,” said chemical engineering major Patrick Salenga. “But when we asked him to let us see his notebooks, he really does take down notes, complete with solutions. We were shocked.”

“I just think I’m ready,” Io said when asked if he still felt nervous in his UP classroom.

But then the jester within quipped: “Maybe there was no answer.”

Most of his teachers agree that behind Calica’s insatiable curiosity is actually a “sweet, thoughtful” boy with funny quirks up his sleeve.

Calica, for example, keeps “a logbook of his crushes,” an amused Dewi Torralba, his Grade 3 adviser, revealed. “Once he sings his little song: ‘Sinong manalo/Sinong No. 1?’ he starts reading off the names of his crushes for this ‘season.’ Most of the girls get embarrassed, but some are amused, because Io is quite cute.”

Io’s Sped class is  composed also of above-average pupils, some excelling in subjects or skills not necessarily right up Calica’s alley.

“We don’t like to pressure him,” said Melissa, the proud mom. “Of course, we encourage and nurture his talents: We get him tutors, we let him join contests, we bring him to UP. But what we want is for him to enjoy his youth.”

The key is balance, his parents said. They don’t let him watch the news on TV “because it’s too serious for him.” They let him play computer games after his lessons. They encourage him to read a wide array of books, like the Harry Potter series.

“Sometimes, we also worry that by making him go to UP, we’re asking too much from him,” Ianne said. “We don’t want him to think he’s obligated to perform at such exceptional levels. But we also don’t want to snuff out his curiosity. We simply encourage him to do what he wants: math and music.”