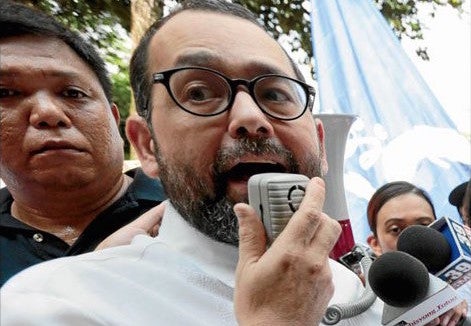 Commission on Human Rights (CHR) Chairman Jose Luis Martin Gascon said there would be no let up in the commission’s attempts to get the administration to cooperate in its probe of alleged summary executions in police operations, particularly in relation to the drug war.

According to reports, acting Undersecretary Catalino Cuy, acting chief of the Department of the Interior and Local Government (DILG), said President Rodrigo Duterte had told police not to share case records.

Asked for his reaction to this, Gascon said: “We shall await formal notice of this denial and will consider all options available to us to obtain the information necessary to be able to conduct a thorough inquiry into these killings – including invoking the [executive order] on Freedom of Information and possibly issuing subpoena.”

Gascon had requested from the Philippine National Police (PNP) the case records in a cordial meeting with Director Gen. Ronald Bato dela Rosa, PNP chief, who had agreed to cooperate.

The meeting came in the wake of the controversial killing of 17-year-old Kian delos Santos last August and after the government itself already reported more than 3,000 deaths of suspects in police drug operations.

In a Senate hearing earlier this month, Gascon revealed that, at present, the PNP had not forwarded to the CHR any of the requested documents.

Gascon reminded the PNP that “these are public documents and official records that – in the public interest – should be made readily available to other agencies, the media, other stakeholders and the public at large.”

He added that sharing them would be “in the spirit and intent” of the Freedom of Information executive order, one of the first orders signed by the President.

“The CHR will use the agreed mechanism of regular consultations with the DILG and the [Philippine National Police] in order to thresh out these concerns and clarify the importance of cooperation,” Gascon told the Inquirer in a text message. “We will always stress that failure to assist CHR in performing its mandate may be construed as unwillingness to address human rights violations.”

“For this reason, we shall continue to request for copies of documents in the custody of law enforcement and call on the current administration to cooperate with CHR in an open and transparent manner,” he added. “Our purpose is to assist in ferreting out the truth that the ends of justice might be served and hope the administration will cooperate fully in these investigations.” /atm