History not done yet with Marcoses–Imee 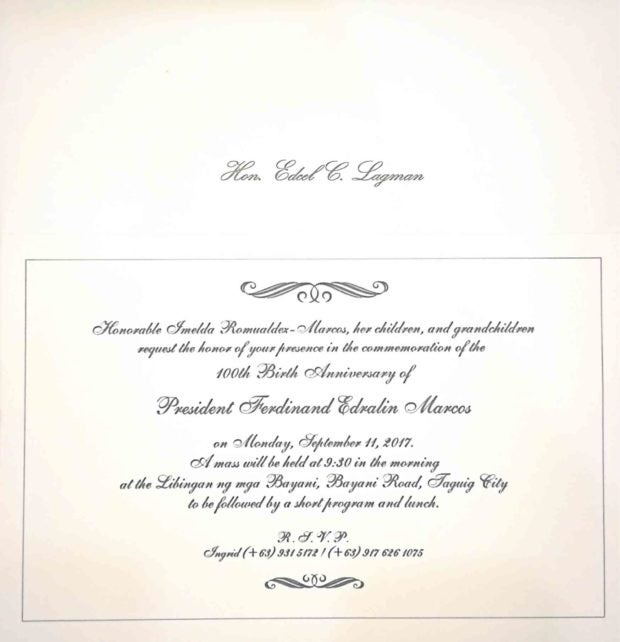 BATAC CITY—Ilocos Norte Gov. Imee Marcos on Friday echoed the statement made by her father, the dictator Ferdinand Marcos, that “history was not done yet” with her family, 31 years after they were ousted from power.

Opening a forum here on the legacies of Marcos, whose 100th birthday on Sept. 11 had been declared by Malacañang as public holiday in Ilocos Norte province, Imee referred to her late father’s comment when they landed at the Hickam Air Force Base in Honolulu after their ouster following the 1986 Edsa People Power Revolution.

“We were all in tears and everyone said, ‘The end is nigh, it is finished, we are dead and doomed,’” Imee narrated.

“My father said, ‘No, children. To my family and to everyone, history is not done with me yet,’” she said at the opening of the two-day Marcos 100 Forum at the Mariano Marcos State University here.

The dictator died in 1989 in Hawaii but his body was flown back to the country only in 1993 when then President Fidel Ramos allowed the Marcos family to return.

“Why is it that this debate, this argument of who our President Marcos was, continues to burn unabated, a hundred years after his birth? Indeed, if the north remembers, winter has not come yet for the legacy of Ferdinand Marcos,” she said.

Imee said some people had described the Marcos 100 Forum as “very disappointing because it is very simple.” But the family organized a “humble celebration for an extremely austere and simple almost monkish man like my father,” she said.

She said: “There will be no parade, like what my mother [former first lady and now Ilocos Norte Rep. Imelda Marcos] wants. No concert, like what [former Sen. Ferdinand “Bongbong” Marcos Jr.] wants, and there will be no shows and dancing, like what I want.”

Instead, the family and the Ilocos Norte government organized debates, storytelling sessions, and a lecture series “that will define Marcos 100 in this very reflective effort, the Marcos legacy,” she said.

The forum began with a lecture by Antonio Contreras, a political science professor of the De La Salle University, on nationalism and how that played a role in Marcos’ 23-year rule of the country.

Contreras said Marcos was the “most intellectual president the country ever had.” He said he had made this assertion for so long that his colleagues had branded him as a “Marcos loyalist.”

Activist lawmakers reacted with revulsion to the plan of Marcos’ widow Imelda and her kin to celebrate the late dictator’s 100th birth anniversary at Libingan ng mga Bayani on Monday.

Some of the anti-Marcos congressmen even got an invitation to the party.

“Yes, I did get an invite and puked on it!” said Akbayan Rep. Tom Villarin, who had opposed the burial of Marcos at the heroes’ cemetery in Taguig City.

In a message thread, the “Magnificent Seven” member showed reporters a copy of his invitation sent out by Imelda Marcos, now an Ilocos Norte representative.

According to the invitation, a Mass will be held at 9:30 in the morning of Sept. 11, to be followed by a short program and lunch.

“With President Duterte’s blessings and absolution of their sins, including his push for their immunity from prosecution, the Marcoses are enjoying their heyday since they were booted out by people power,” he said.

Albay Rep. Edcel Lagman, another Marcos critic who received an invitation to the event, said the planned “party” at Libingan would defile the memory of all the heroes buried in that cemetery.

“This planned party celebrating the centennial of his birth defiles the memory of all the legitimate heroes buried in Libingan ng mga Bayani even as it rubs salt on the still-bleeding wounds of the thousands of victims of the Marcoses’ brutalities, atrocities and unparalleled greed and plunder of the national coffers,” he said.

Gabriela Rep. Emmi de Jesus, another anti-Marcos activist, said it would be an “irony of ironies” if the Makabayan bloc also got an invite.

On Monday, Mr. Duterte issued a proclamation declaring Sept. 11 a holiday in Marcos’ home province of Ilocos Norte to mark his birth anniversary.

Mr. Duterte has maintained a warm relationship with the Marcos family.

He recently revealed that the Marcoses had offered to return part of their hidden wealth, but that it would have to be done in exchange for immunity.

A staff of Vice President Leni Robredo said she did not get an invitation to the Marcos party.

Presidential spokesperson Ernesto Abella could not say if Mr. Duterte has been invited to the event, but in any case, the President will not be in Metro Manila on Sept. 11.

“He will be in Davao,” Abella said.

And “unless he bilocates,”  Mr. Duterte was not expected to show up at the heroes’ cemetery, Abella said.

Asked if Malacañang would be sending a representative to the event, he said “it is not an official activity as far as the Office of the President is concerned.”

Abella said the nonworking day proclamation for Ilocos Norte was a “one-off” event in consideration of the centenary.