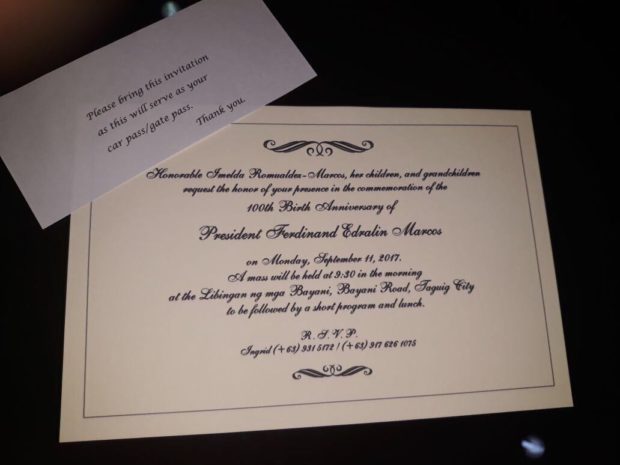 An anti-Marcos lawmaker reacted with revulsion to an invitation of Ferdinand Marcos’ widow Imelda Marcos to celebrate the late dictator’s 100th birthday anniversary at the Libingan ng mga Bayani (LNMB) on Monday.

“Yes, I did get an invite and puked on it!” said Akbayan Rep. Tom Villarin, who had opposed the burial of Marcos at the heroes’ cemetery in Taguig City.

In a message thread, the “Magnificent Seven” congressman showed reporters a copy of his invitation sent out by Imelda Marcos, her children and grandchildren.

According to the invitation, a Mass will be held at 9:30 in the morning of September 11 to be followed by a short program and lunch.

Villarin said the Marcos family, who had reportedly offered to return part of their hidden wealth in exchange for immunity, is apparently “enjoying their heyday” more than three decades after the Marcos dictatorship was toppled during the Edsa Revolution of 1986.

“With President Duterte’s blessings and absolution of their sins, including his push for their immunity from prosecution, the Marcoses are enjoying their heyday since they were booted out by people power,” he said.

“While Duterte and Marcos party in the Libingan, the blood of thousands killed by both of them cry out for justice! The day of reckoning will come and history will judge harshly those who kill the truth and our own humanity,” Villarin said.

Speaker Pantaleon Alvarez said he was not even invited to the Marcos bash.

“I’m not invited in the first place and I have also better things to do,” he told the Inquirer in a text message.

The late strongman’s remains had been transferred from Ilocos Norte to the LNMB amid uproar from victims of human rights violations during his two-decade martial rule. KGA

READ: Duterte explains Marcos burial: He was a president and a soldier