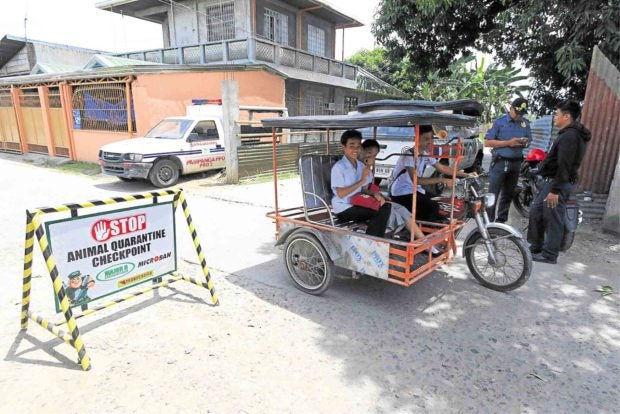 CITY OF SAN FERNANDO—The Department of Agriculture (DA) removed the 7-kilometer control zone surrounding San Luis town in Pampanga province that was the center of a bird flu outbreak, but said the quarantine it imposed remained in effect.

The control zone was deactivated on Sept. 1, more than two weeks after Agriculture Secretary Manny Piñol allowed the transport of poultry products from Luzon to the Visayas and Mindanao.

The DA began pulling out both its personnel and avian flu control checkpoints which it fielded since Aug. 11 when the outbreak was declared in San Luis, DA Central Luzon Director Roy Abaya said.

“The checkpoints were removed because there was nothing to take out anymore. All birds have been culled,” Abaya said, referring to 470,640 layers, broilers, ducks, pigeons, game fowls, native chickens and quails that were destroyed within a 1-km quarantine zone around San Luis as well as the 7-km control area.

The birds were culled to prevent the H5N6 strain of the avian flu from spreading. That was the same strain that hit China in 2013 and Taiwan in February this year. Health officials said no one exposed to the virus, like poultry farm workers, had been stricken ill.

A 21-day quarantine (corresponding to the virus’ incubation period) began in San Luis last week when the DA’s Bureau of Animal Industry (BAI) certified that all birds within the 1-km radius of Barangay San Carlos and Sta. Rita in San Luis had been culled.

This period required poultry owners to clean and disinfect their farms and coops.

Bird flu was also detected in villages in towns of Jaen and San Isidro in Nueva Ecija province which were also covered by quarantine. Government veterinarians, soldiers and volunteers destroyed 114,850 quails in Jaen and 68,950 chickens in San Isidro.

In place of checkpoints, the DA will shift to regular monitoring and spot checking in poultry farms, Abaya said.

Abaya warned poultry farmers that they were still prohibited from bringing in fowls and reviving their chicken or quail farms.

To determine if the quarantine areas are free of avian flu, the DA and BAI will introduce sentinel chicks to observe and test whether the birds will survive the bird flu areas within a 35-day period.

The outbreak led to huge losses in the poultry sector as prices dropped largely due to fears from consumers.

The DA has indemnified poultry owners in San Luis with an initial P20.7 million.

A poultry grower in San Isidro received P5.516 million while two other poultry farmers in Jaen got amounts ranging from P209,000 to P150,000.

The poultry farmers initially complained that the damage compensation rate of P80 for every chicken and duck killed and P10 for every quail was low.

During his visit to Pampanga on Aug. 28, President Duterte declared that chickens, ducks and eggs were safe for consumption and promised to increase the compensation if funds were available from the Philippine Amusement and Gaming Corp.