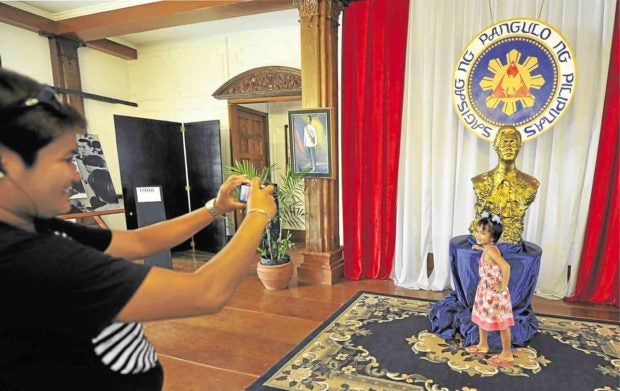 The Marcos family home in Batac City, which has been turned into a museum, remains one of the top tourist drawers in Ilocos Norte province. —EV ESPIRITU

BATAC CITY—Every first time visitor to this city makes it a point to visit the Ferdinand E. Marcos Presidential Center, where a family crypt used to house the remains of the dictator, whose 100th birthday on Sept. 11 has been declared a non-working holiday in Ilocos Norte province.

Only 32,903 visitors were recorded by the Marcos center from January to May this year, compared with the 131,168 visitors it drew for
the same period last year, according to the Ilocos Norte tourism office.

The center, which records tourist arrivals here, said the Marcos museum used to receive the most number of foreign and domestic tourists in the province.

The Marcos family was exiled following the 1986 Edsa People Power Revolution. The dictator died in 1989 in Hawaii but his body was flown back to the country only in 1993 when then President Fidel Ramos lifted the ban on any Marcos family member to return.

Because Ramos refused to allow the burial at the Libingan ng mga Bayani, the Marcos body was flown to Ilocos Norte and had been kept for 23 years in the mausoleum built under the Marcos ancestral house here.

Marcos supporters and tourists frequented the crypt to view the body, encouraging the Marcos family to convert the house into a museum.

“Admittedly, there had been a decline [in visitors] but it was compensated by local [tourists],” said Batac City Mayor Albert Chua.

But the provincial government has lined up projects that will help sustain the high number of tourist arrivals in Batac, according to Ianree Raquel, Ilocos Norte tourism officer.

At the plaza here, the Batac and the Ilocos Norte governments are redesigning the city square into a family-friendly playground and an educational center.

On Sept. 10, the National Historical Commission of the Philippines will unveil a historical marker at the foot of a Marcos statue crafted by Italian sculptor Giuseppe Marinucci.

Located at the Batac City park, the statue was placed on a four-meter high pedestal for the late president’s centennial celebrations.

“The Ilocano community has been annually celebrating the birth date of the late Ferdinand E. Marcos and commemorating his life and contributions to national development as a World War II veteran, distinguished legislator and former president,” the proclamation said. —WITH A REPORT FROM LEILA B. SALAVERRIA