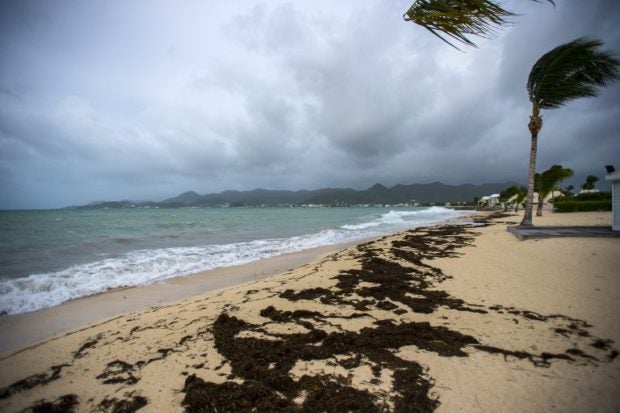 A picture taken on September 5, 2017 shows a view of the Baie Nettle beach in Marigot, with the wind blowing ahead of the arrival of Hurricane Irma. Ferocious Hurricane Irma bears down on the eastern Caribbean with strong winds and potential for huge storm surges, prompting people to pack into shelters, stock up on essentials and evacuate tourist areas as far north of Florida. AFP

The island is in need of emergency assistance, he said. “I have sick people to evacuate, I have a population to evacuate because I don’t know where I can shelter them,” he said.

At least six people have been killed in the French part of St. Martin, Guadeloupe prefect Eric Maire said.

Hurricane Irma, one of the most powerful Atlantic storms on record, cut a deadly swath through a string of small Caribbean islands on Wednesday.

The French minister for overseas affairs, Annick Girardin, was to fly to Guadeloupe late Wednesday with emergency teams and supplies to assess the situation, the ministry said.

“It’s too soon for casualty figures (but) I can already tell you the toll will be harsh and cruel,” said French President Emmanuel Macron, adding that he expected damage on St. Barts and St. Martin to be “considerable”.

St Martin (“Sint Maarten” in Dutch), located south of the island of Anguilla, is divided between the Netherlands and France.

St Barts (“Saint Barthelemy” in French), which lies to the southeast of St Martin, is administered with the status of a French collectivity, as is the French part of St Martin. KGA