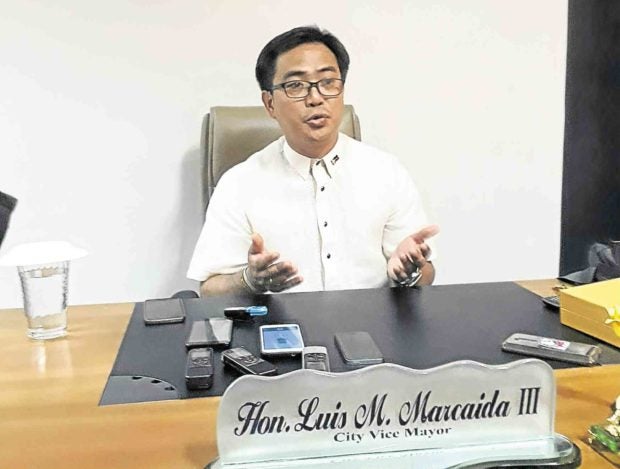 PUERTO PRINCESA CITY — Vice Mayor Luis Marcaida III, who was arrested in a drug raid in his house in this Palawan provincial capital on Monday, had been identified by the police as early as October last year as a “protector” of the illegal drug trade.

Officials of the Mimaropa (Mindoro, Marinduque, Romblon, Palawan) regional offices of the Philippine National Police and the Philippine Drug Enforcement Agency (PDEA), however, could not provide details on Marcaida’s supposed involvement in the drug trade.

According to Supt. Imelda Tolentino, regional police spokesperson, Marcaida has been classified as a “high value target level 3” since Oct. 10 last year.

Pressed on Marcaida’s supposed role in the illegal activity, Tolentino said the official was a “protector,” based on police intelligence reports.

The regional police, however, could not provide details and referred the Inquirer to the PDEA.

In a separate telephone interview, Gracel Lano, PDEA regional spokesperson, said the agency did not have much information on Marcaida except that he was a “high value target.”

“It was the police who carried out that operation,” Lano said.

Recovered by the Camp Crame-based raiding team from Marcaida’s house were 30 sachets of “shabu” (crystal meth), a .22 caliber rifle, several handguns and grenades.

The shabu packets were found behind Marcaida’s portrait on a display table while other pieces of evidence were found in different sections of the living room on the ground floor of the vice mayor’s two-story house.

Ferdinand Topacio, Marcaida’s lawyer, questioned the manner of the search and the police’s claim that the vice mayor was a “high value target” in the government’s war on drugs.

“Who put him (Marcaida) on that list and why was he there? That list is arbitrary and, strictly speaking, that is a violation of the due process clause of the constitution,” Topacio said.

He said Marcaida’s camp would question the evidence “at the proper time.”

In a press conference on Wednesday, Marcaida’s family accused the police raiding team of planting evidence.