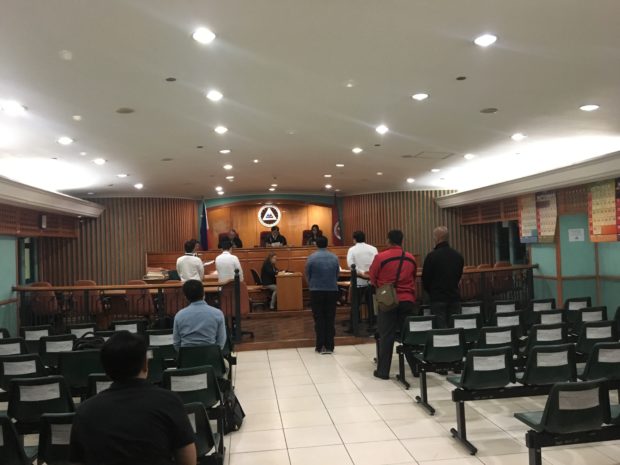 Detained former Palawan Governor Mario Joel Reyes has pleaded not guilty to charges of entering into anomalous infrastructure contracts funded by P1.53 billion in royalties from the Malampaya gas field in 2008 and 2009.

Reyes was arraigned on Tuesday before the Sandiganbayan Second Division for 14 counts of violation of Section 3(e) of the Anti-Graft and Corrupt Practices Act, which prohibits causing undue injury to the government and giving unwarranted benefits to private parties

He was also arraigned for 22 counts of violation of Section 3(g) of the same law, for entering into disadvantageous contracts on behalf of the provincial government.

Reyes, who is currently detained at the Puerto Princesa City Jail pending trial for the January 2011 murder of environmentalist broadcaster Gerry Ortega, had to be flown in from Palawan.

Since his plane was caught up in airport traffic, he ran late and had to be arraigned separately from his 34 other coaccused.

The Office of the Ombudsman has brought so many charges against him that Reyes waived the reading of the allegations and entered his plea quickly.

Ortega’s exposé of the alleged irregularities supposedly led to his killing.

The Reyes government got hold of the Malampaya money following the issuance of Executive Order No. 683 in 2007, an interim agreement that granted Palawan half its claim of the 40-percent share of the proceeds amid a dispute.

Prosecutors accused Reyes of conspiring with seven other officials to award the 209 contractors to 11 construction firms sometime in 2008, despite several violations of the Government Procurement Reform Act.

These include the failure to post the bid invitation online at the Government Electronic Procurement System and the province’s website, and the non-submission of bidding documents.

Half the value of these projects went to Puerto Princesa City-based BCT Trading and Construction, whose 80 contracts are worth P722.75 million. Another large supplier is R.C. Tagala Construction of Narra town, which won 14 contracts worth P301.46 million.

Reyes’s charges comprised only 36 of the 158 charges pending in the antigraft court.

The other charges concerned the engineering office’s alleged fabrication of accomplishment and inspection reports, as well as contract violations, for 39 infrastructure projects worth P461.37 million.