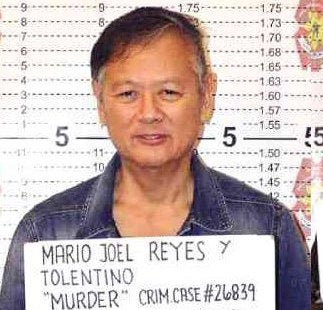 MANILA — Former Palawan Governor Mario Joel Reyes and 41 others have been charged at the Sandiganbayan for anomalies in 209 contracts funded by P1.53 billion in royalties from the Malampaya gas field in 2008 and 2009.

The Office of the Deputy Ombudsman for Luzon filed 159 criminal charges, totaling 491 pages, for alleged procurement violations by the provincial government led by Reyes.

State prosecutors also alleged that the engineering office faked the accomplishment and inspection reports and allowed the violation of the terms for 39 infrastructure contracts worth P461.37 million.

These projects from across the island province—which included roadworks, schools, day care centers, and even an airport development project in San Vicente town—were actually unfinished at the time when these were certified as completed in 2008 and 2009.

Add to these the contracts with disadvantageous provisions, a total of 54 projects were singled out as riddled with irregularities.

The exposé of these alleged irregularities supposedly led to the January 2011 murder of environmentalist broadcaster Gerry Ortega. Reyes is currently jailed pending trial for that murder.

The Reyes government got hold of the Malampaya money following the issuance of Executive Order No. 683 in 2007, an interim agreement that granted Palawan half its claim of the 40-percent share of the proceeds amid a dispute.

Prosecutors said Reyes conspired with seven other officials to award the 209 contractors to 11 construction firms sometime in 2008, despite the violation of several requirements under the Government Procurement Reform Act.

These included the failure to post the bid invitation online at the Government Electronic Procurement System and the province’s website, and the non-submission of bidding documents. 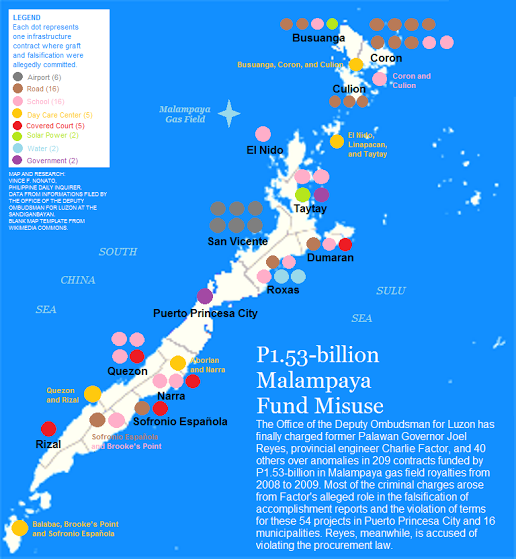 Map of the Malampaya royalty-funded projects in Palawan, that were marked with anomalies and irregularities. Photo from Vince Nonato/Inquirer

Likewise, the infrastructure contracts were found not to contain a clause for the payment of liquidated damages in case of project delay.

There was also improper evaluation of bid proposals as one set of key personnel was allowed to supervise construction work in different municipal projects with overlapping timetables. This violated the rule that evaluators must stay in the job site and handle only one contract at a time, the charge sheet read.

It is actually Factor, not Reyes, who faces the most charges.

Reyes was not involved in most of the 159 charges, which are related to the provincial engineering office’s alleged offenses regarding 39 individual contracts.

His alleged cohort, quality control division chief Alfredo Padua, faces 39 counts of graft, 76 of falsification, and seven of violating PD 1759, or a total of 122 criminal cases.

Factor, Padua, Abrina, and Cabuigen, as well as assistant provincial engineer Federico Rubio Jr. and 10 resident engineers were accused of causing the government a total of P169.71 million in damages for faking the accomplishment reports to justify the payment for 39 unfinished projects priced at P461.37 million.

Egregious discrepancies allegedly attended seven of these projects, which were barely half-completed. A supposedly 100-percent completed road widening project in Coron, for one, turned out to be 13.81-percent finished only.

At the same time, state auditor Edwin Iglesia and senior technical audit specialist Ronelo del Socorro of the Commission on Audit regional office were slapped with one count each of graft, falsification, and violation of PD 1759.

Their charges pertained to the allegedly fabricated CoA inspection report for the San Vicente Airport Development Project dated Sept. 11, 2009. They stated that the project was 58.36 percent complete during ocular inspection, when it was only 8.8 percent finished.

Sought for comment, Reyes’ counsel Ferdinand Topacio said he would have to read the charges first. Ortega’s daughter Michaella did not respond to requests for comment.  SFM/rga