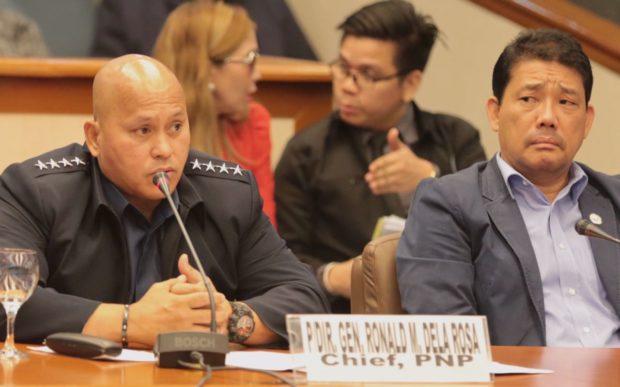 President Rodrigo Duterte wanted the police to get a “clearance” from him first before releasing to the Senate the spot reports on the thousands of killings in the country, Philippine National Police (PNP) Chief Director General Ronald “Bato” dela Rosa said on Tuesday.

At the hearing of the Senate committee on public order, Senate Minority Leader Franklin Drilon reminded the PNP of its promise to provide them the spots reports of all deaths under police operations.

Drilon said the request was made when the chamber was investigating the death of suspected drug lord, former Albuera, Leyte Mayor Rolando Espinosa Sr.

“Can we reiterate that request that all these spot reports for all these killings should be submitted as part of the records of this proceeding…?” he said.

“Yes your honor,” Dela Rosa said, “because there was an instruction from the President that we have to get clearance from him before we give those papers to you, your honor.”

Senator Panfilo Lacson, who chairs the committee, also called Dela Rosa’s attention for his failure to fulfill its promise to submit the reports.

“If you think I’m very kind, I’m not ha,” said Lacson, who also became PNP chief during the time of then President and now Manila Mayor Joseph Estrada.

Lacson then asked what could be the reason why Duterte wanted to stop the submission of the police reports to the chamber.

“…these are official records. Make a guess,” said the senator.

“He (Duterte) just told me your honor that you may submit that (police reports) if you have a clearance from me. That’s his word, your honor,” Dela Rosa said.

“But why?” Lacson asked again.

“I will ask him again, your honor,” the PNP chief said.

Under Drilon’s questioning, Dela Rosa told the committee that the total number of deaths under police operations was 2, 216. JPV