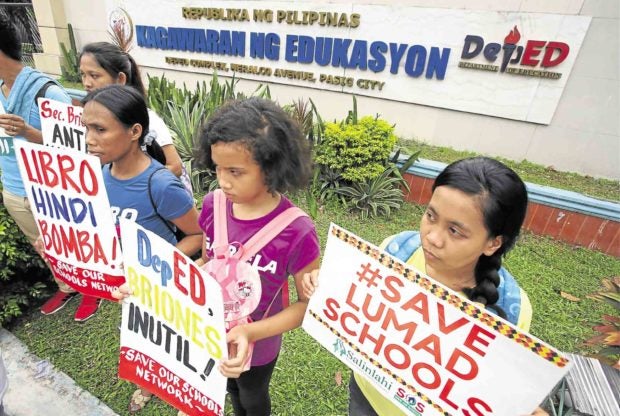 A group of “lumad” students holds a rally on Monday at the Department of Education to protest military harassment of lumad schools weeks after a bigger lumad group (top photo) rallied during the State of the Nation Address of President Duterte. —NIÑO JESUS ORBETA AND EDWIN BACASMAS

DAVAO CITY — At least 30 schools and 1,300 students were displaced in the military’s continuing assault on “lumad” schools, according to a human rights group.

Karapatan said volunteer teachers were also being harassed through what the group said were trumped-up charges filed by the military.

CLANS runs schools for lumad children in at least five provinces in Mindanao.

Lt. Col. Jose Marie Santos, MBLT 2 commander, said the case was in connection with the killing of a Marine and the wounding of nine others in an ambuscade by communist rebels in Kalamansig, Sultan Kudarat.

But Santos said his unit was not responsible for the closure of CLANS schools, saying the closure order was implemented by the Department of Education and the local government.
Santos, in a text message, said the schools were ordered closed because their teachers were not licensed to teach and “their school did not have license to operate.”

“State security forces are employing their dirty maneuvers again, using the law to falsely prosecute those who serve communities long neglected by the government,” Palabay said in the Karapatan statement.

She said the series of attacks and harassment against the teachers led to the closure of 33 CLANS schools in the provinces of Davao Occidental, South Cotabato, Sarangani, Sultan Kudarat and Davao del Sur and disrupted classes for 1,328 lumad students.

“We demand the immediate withdrawal of these trumped-up charges,” Palabay said.
The Duterte administration, she said, was now using legal tactics in its counterinsurgency program “to demoralize communities and prevent them from asserting their rights.”

She said attacks against lumad learning institutions “have exponentially increased” after martial law was imposed in Mindanao when Islamic State-inspired militants took over sections of Marawi City in May.

The assault on lumad communities accused of sheltering communist rebels continued even during peace talks between the government and National Democratic Front of the Philippines —FRINSTON LIM AND JULIE S. ALIPALA

Read Next
Vaccine for Japanese encephalitis out of stock
EDITORS' PICK
Lacson wants DOF to suspend TRAIN law as oil prices rise
Delivering delight against all odds
153 protests filed vs China actions in PH waters in 2021 — DFA
Malls, parks in NCR still off limits to minors even with eased restrictions
Next level mobile photography within reach with vivo X70 co-engineered with ZEISS
Leaked: A 60x Zoom and all-new Helio G96 mean a complete overhaul for TECNO Mobile’s new CAMON 18 series
MOST READ
Robredo to supporters: Be calm, gentle and do good deeds
Matibag calls Senate budget hearing ‘political,’ gets kicked out
Drilon: Tax and then ban Chinese firm in pandemic funds mess
Colmenares denies Makabayan is supporting Pacquiao
Don't miss out on the latest news and information.