Amulets fail to save Iloilo’s ‘most wanted’ drug lord 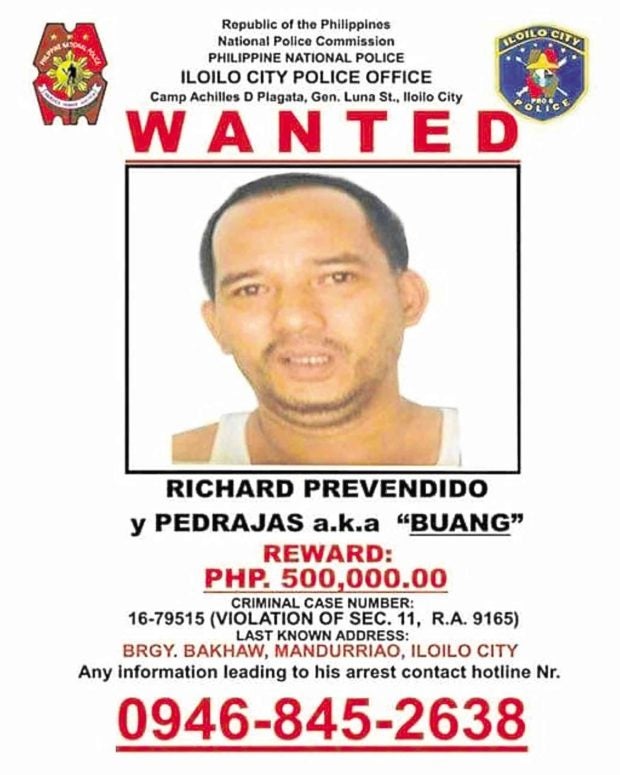 The lure of the P1.1-million reward for the head of Richard “Buang” Prevendido, the fugitive suspected of being Western Visayas’ biggest drug lord, enticed a gang member to tip off the police of his whereabouts.

In the end, not even his amulets could save him from the hail of bullets that killed him.

Prevendido died from at least three gunshot wounds on Friday evening after he allegedly opened fire at police officers who were serving a warrant for his arrest for a drug case in a two-story house in Landheights Subdivision in Balabago, Jaro District in Iloilo City.

Senior Supt. Marlon Tayaba, Iloilo provincial police director who led the arresting team, said Prevendido and his son fired at policemen during the operation around 8:30 p.m.

Prevendido, 55, died in a room on the second floor of the house. Jason was killed in another room.

Tayaba said they also found “anting-anting,” amulets believed to possess mystical powers that protect the owner from evil spirits and from harm.

Some amulets were worn by Prevendido. Also found in the house were trinkets, oil made from roots and tree barks, herbs, religious images and black robes.

“He lived like a hermit and food was delivered to him,” Tayaba said during a press conference on Saturday.

Prevendido was also protected by a 2-meter-tall (7-foot)  concrete perimeter wall that was topped with barbed wire.

He had eluded arrest despite a P1.1-million cash reward for information leading to his arrest.

Malacañang hailed the operation and noted the danger faced by police officers in running after top drug suspects.

Tayaba said they sent out tracker teams to locate Prevendido while policemen monitored properties linked to him. These include a rest house in San Joaquin town in Iloilo, a resort in Buenavista town on Guimaras Island and a fighting cock farm in Anilao, Iloilo.

In April, police received information that Prevendido was staying in an unspecified house in Landheights Subdivision.

On Friday at 4 p.m. an informant finally located the house where he was staying. This was confirmed by police through footage taken by a drone.

Tayaba said the informant who would receive the reward belonged to Prevendido’s inner circle.

Binag said the laptops and mobile phones recovered from the house will be closely examined for possible information on Prevendido’s drug dealings.

Prevendido’s group had as many as 15 core members who supervised the drug distributors, according to Tayaba.

Binag expected the supply of illegal drugs in Western Visayas to decline by 30 percent following the death of Prevendido, who became the region’s top drug lord after the killing of Melvin Odicta.

A lone gunman shot Odicta and his wife, Merriam, on Aug. 29, 2016 shortly after they disembarked from a passenger ship at the Caticlan port in Malay, Aklan. —With a report from Leila B. Salaverria