The Muslim hajj pilgrimage in numbers 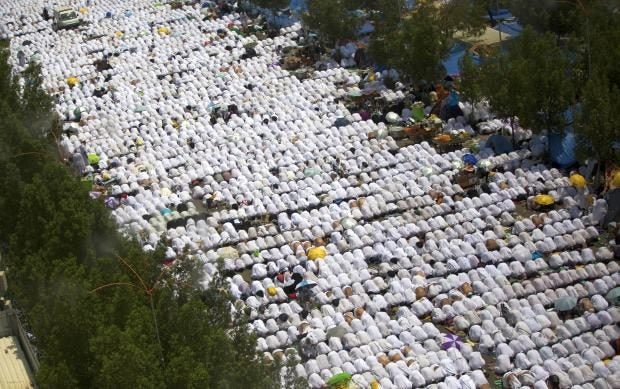 The Islamic hajj pilgrimage draws people from around the world to Saudi Arabia each year. The crowds, squeezed shoulder to shoulder in prayer five times a day, fill the city of Mecca and surrounding areas to perform a number of physically demanding and intricate rites.

The five-day-long hajj is required of all Muslims with the means to perform it once in a lifetime. Through intense worship and repentance, its goal is remission of past sins and drawing Muslims closer to God.

As Muslims around the world celebrate, here’s a look at one of the world’s largest pilgrimages in numbers:

2.35 million is the number of pilgrims from around the world performing hajj this year.

7 is the number of times Muslims circle the cube-shaped Kaaba counterclockwise, their hearts tilted toward it, during one of the rites of hajj.

104 is the age of the oldest pilgrim performing the hajj this year. Ibu Mariah Marghani Muhammad is from Indonesia.

3,500 is the number of charter buses used to transport pilgrims to the various sites for hajj.

1.75 million pilgrims are from outside Saudi Arabia.

600,000 is the number of pilgrims from Saudi Arabia, either residents or citizens.

1.33 million is the number of male pilgrims.

1.02 million is the number of female pilgrims.

59 percent are from non-Arab Asian countries.

24 percent are from Arab countries.

11 percent are from non-Arab African countries.

5 percent are from Europe.

1 percent are from North America.

100,000 is the number of Saudi security forces tasked with protecting and assisting pilgrims on the hajj.

5,000 is the number of cameras along hajj routes.

2015 is the year of one of the deadliest incidents in hajj, when a stampede and collision of two crowds crushed people under the force.

2,426 is the number of people killed in the incident, according to an Associated Press count based on media reports and officials’ comments from 36 of the more than 180 countries that sent citizens to the hajj.

464 is the number of Iranian pilgrims killed in the 2015 incident, the highest death toll of any country.

111 is the number of people killed that same year from a crane collapse inside Mecca’s Grand Mosque.