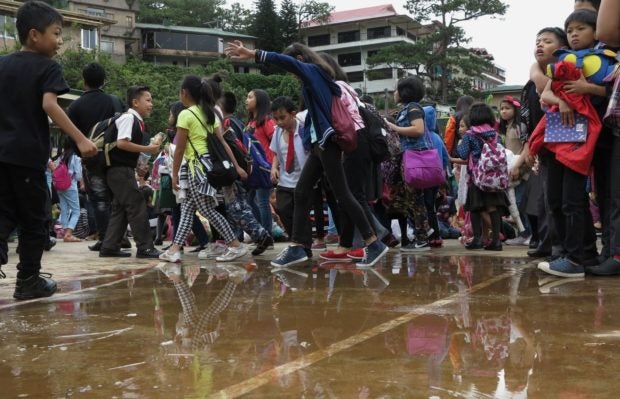 School children in Baguio City — some showing emotions — troop to an open area after an earthquake shook the summer capital and much of the Cordilleras late Wednesday morning, August 30, 2017. The Philippine Institute of Volcanology and Seismology measured magnitude 4 at the quake’s epicenter near Sagada, Mountain Province. PHILIPPINE DAILY INQUIRER / EV ESPIRITU

Phivolcs traced the temblor’s epicenter 15 kilometers northwest of Sagada at a depth of 5 kilometers.

It said the quake of tectonic origin struck at 11:34 a.m.

The Bontoc Fire Station alerted residents on its Facebook page.

“THIS IS NOT A DRILL. Stay on the alert. Be safe,” the Bontoc unit of the Bureau of Fire Protection said. 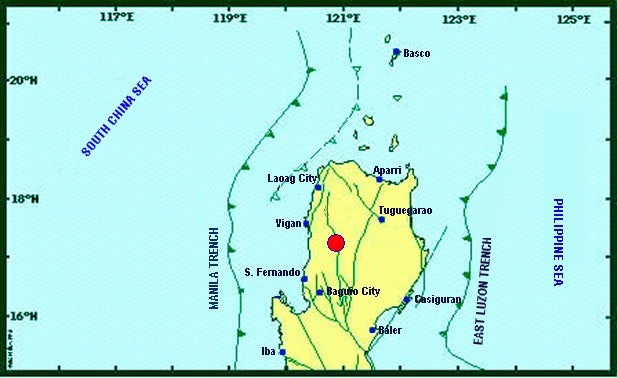 A Phivolcs map shows the epicenter of the magnitude 4 earthquake that hit Sagada, Mountain Province, at 11:34 a.m., August 30, 2017. PHIVOLCS IMAGE

Some netizens reported feeling the quake in parts of Baguio City.

Following the ground shake, Bontoc Mayor Franklin Odsey suspended the afternoon classes in all elementary and high schools in the town.

In an executive order posted online, Odsey cited the “anxiety and fear” brought about by the “sudden tremor felt this morning” in suspending afternoon classes.

Phivolcs said no aftershocks or damage were expected from the temblor. CBB