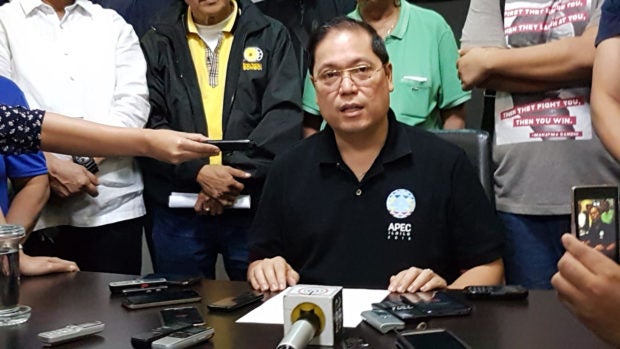 ILOILO CITY—Iloilo City Mayor Jed Patrick Mabilog on Tuesday reiterated his denial of involvement in illegal drugs, a day after President Rodrigo Duterte again named him as among the protectors of illegal drugs included in the President’s “updated list.”

“We have not been remiss (in the campaign against illegal drugs) according to my ability and my knowledge. If it is not enough, I publicly would like to say I am sorry, I apologize to the media, to the people of Iloilo City if it is not enough. But then, I did exert everything but one thing I am quite sure of, with God as my witness that I have never protected anyone, especially in illegal drugs. Never, I will never do that,” he told about 2,000 city hall employees during the city government’s flag ceremony.

Mabilog said he has never called anyone to back off from any drug personality or to release anyone who has been arrested.

The President on Monday repeated his accusation against Mabilog as being included in the list of drug protectors.

Also on Monday, he ordered the reassignment of controversial police official Chief Insp. Jovie Espenido, chief of the Ozamiz City police, to Iloilo.

At one point during the National Heroes’ Day commemorative program, the President publicly asked Espenido if Mabilog will also die, citing the deaths of Mayor Rolando Espinosa of Albuera town in Leyte and Mayor Reynaldo Parojinog in Ozamiz City where Espenido have been both assigned as chief of police.

Mabilog in his speech urged Ilonggos to correct the wrong perception about the city and again welcomed Espenido on his new assignment.

“We have to support and cooperate (in the anti-illegal drugs campaign) and we have to show that our city is not like what it is perceived to be,” the mayor said.

He said it was up to Ilonggos to correct this “stain” because this affects all Ilonggos in the city.

The President has repeatedly described Iloilo as “most shabulized” and “bedrock” of illegal drugs even as government figures have shown that Western Visayas, which includes Iloilo, is not among the areas with the most drug affected villages.

Meanwhile, a fierce critic of Mabilog also pointed out that the mayor should not be compared to Espinosa and Parojinog.

“I accused him before of having close ties with known drug personalities but he was never a drug lord or a war lord,” said city councilor Plaridel Nava.

“It’s not right to threaten (Mabilog). The situation in Iloilo City is different from Albuera or Ozamiz,” Nava told the INQUIRER.

He said Mabilog could be held liable for neglect of duty but he said this should be done by filing a case against him.

Nava pointed out that slain alleged drug lord Melvin Odicta was already a drug personality even before Mabilog became mayor in 2010.

He said that while illegal drugs operations still continue, “these have been reduced to remnants of the group led by slain alleged drug lord Melvin Odicta.”

“Many are new players who are transient in Iloilo,” Nava said.

Another alleged drug lord, Richard Prevendido, is being hunted down by law enforcers with a P1-million cash reward for information leading to his arrest.

While he supports the campaign against illegal drugs, Msgr. Meliton Oso, executive director of the Jaro Archdiocese Social Action Center, also challenged officials to correct the misconception about Iloilo.

“It’s time for the Ilonggo public functionaries to speak out and correct the misconception that we are the bedrock of shabu. I don’t believe that is true. Other provinces and cities are much worse. But it seems that everybody is afraid (to speak out),” Oso said.

Reacting to the Bible-quoting statements of Espenido that it was the will of God on who will die or live, Oso reminded the police official that “not all that happens is the will of God as other things are the work of (humans).”

He reiterated his call that due process and respect for life should be observed in the anti-illegal drugs campaign.

“God does not will the death of a sinful man because He wants him to be converted,” Oso said. JPV