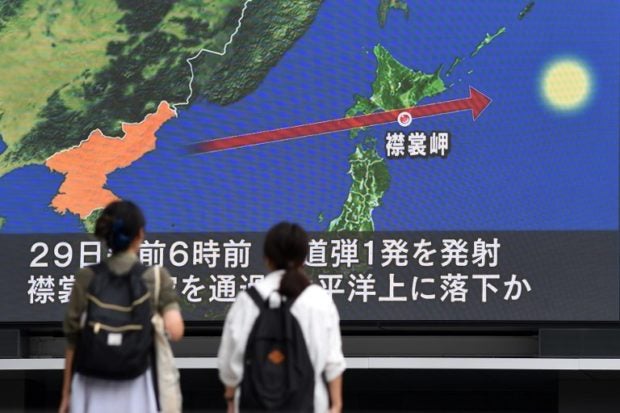 Pedestrians watch the news on a huge screen displaying a map of Japan (R) and the Korean Peninsula, in Tokyo on August 29, 2017, following a North Korean missile test that passed over Japan. / AFP PHOTO / Toshifumi KITAMURA

Russia on Tuesday said it was “extremely worried” about the situation in North Korea, hitting out at a “tendency towards an escalation” after Pyongyang fired a ballistic missile over Japan.

“We see a tendency towards an escalation … and we are extremely concerned by the general developments,” Russia’s deputy foreign minister Sergei Ryabkov was quoted as saying by RIA Novosti state news agency.

Ryabkov said the huge joint military drills between South Korea and the United States, which began on August 21, “had played their role in provoking Pyongyang into this new firing.”

Tens of thousands of troops are participating in the two-week “Ulchi Freedom Guardian” exercise on the Korean Peninsula in a move which the North views as highly provocative, seeing it as a rehearsal for an invasion.