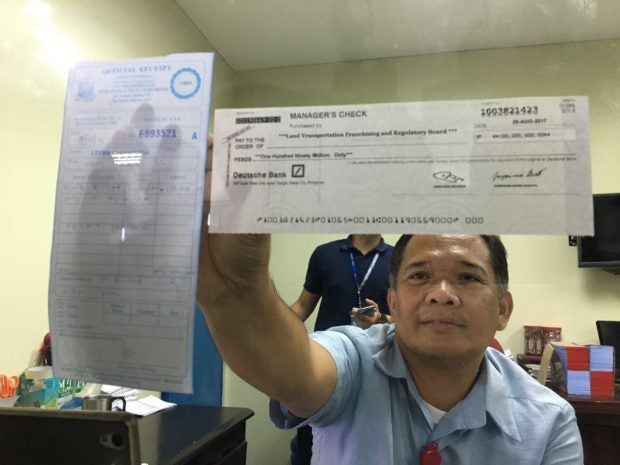 Uber has paid on Tuesday the P190-million fine imposed by the LTFRB, in exchange for the transport network company not serving its one-month suspension that was to end on Sept. 15. Photo by Jovic Yee

Uber settled on Tuesday the P190-million fine imposed by the Land Transportation Franchising and Regulatory Board (LTFRB), making it a step away from reactivating its app two weeks after it was suspended by the agency.

At around 12:45 p.m., Uber lawyers Ane Mascenon and Roberto Ramiro brought to the LTFRB a check of P190 million. They however, declined, to issue a statement.

The fine was in exchange for Uber not fully serving its one-month suspension.

As of writing, the LTFRB is still “waiting for confirmation” from Uber’s bank that its more than 36,000 drivers who have been affected by the suspension have indeed received financial assistance from the transport network company (TNC).

Uber should’ve givent its drivers close to P300 million in the 19 days it was out of operation. In total, it cost the TNC nearly half-a-billion pesos for not complying with the LTFRB’s order not to accept and accredit new drivers into its platform.

LTFRB board member Aileen Lizada earlier said that Uber can only go online once the fine has been paid and once they have confirmed that the TNC’s drivers have received what is due them.