“Will he live?” President Rodrigo Duterte asked, referring to Iloilo City Mayor Jed Patrick Mabilog, whom he had linked to the narcotics trade, after announcing on Monday that he was assigning controversial Chief Insp. Jovie Espenido as police chief of the city.

Espenido had served as police chief of Albuera, Leyte province, and is chief of police of Ozamiz City, Misamis Occidental province, where the mayors, whom Mr. Duterte had linked to drugs, were killed by police in alleged shootouts.

Is Mabilog next? The Iloilo mayor said he was puzzled, but he nonetheless welcomed Espenido’s assignment to his city.

Mr. Duterte called Espenido to the front and told him to stay there.

“I will ask you again. You asked for the assignment in Leyte. The mayor there died,” Mr. Duterte said, breaking off midway through a prepared speech during National Heroes’ Day celebration at Libingan ng mga Bayani in Taguig City where Espenido and 129 soldiers killed in the battle for Marawi City were honored.

“Now, you want Iloilo because Mabilog has been identified as a protector. Will he live?” Mr. Duterte said.

“I just want to ask because I will again be accused. You shoot and I’m the one published,” he added.

Espenido did not reply, but later he told reporters that his assignment to Iloilo was “God’s will.”

“You know that my superior’s orders, especially the President’s, are God’s will. We will do our best,” he said.

Espenido urged Mabilog to cooperate in the Duterte administration’s campaign against illegal drugs.

Asked about his orders to Espenido, Mr. Duterte said: “Your duty requires you to overcome the resistance of the person you are arresting … [If] he resists, and it is a violent one … I hate to see dead policemen and soldiers performing their duty. Do you hear me? Your next assignment is Iloilo.”

Mr. Duterte said “murder and homicide and unlawful killings” were not allowed and that police had to uphold the rule of law while carrying out their duties.

Mr. Duterte unleashed the war on drugs after taking office in June last year following an election campaign in which he vowed to use deadly force to wipe out crime and drugs.

Thousands of people have been killed and the violence has been criticized by much of the international community.

Mabilog was one of the officials named by Mr. Duterte last year as among public officials involved in the narcotics trade.

No charges, however, had been filed by the police against the mayor.

Mabilog has since been aggressively implementing programs and activities against illegal drugs in his city.

But Espenido’s assignment to Iloilo has given Senate Minority Leader Franklin Drilon a “cause of concern.”

In a text message, Drilon acknowledged that it was President Duterte’s prerogative to post Espenido in Iloilo.

“And the peace-loving, cultured and law-abiding Ilonggos welcome (Espenido) to Iloilo City,” said Drilon, who hails from Iloilo. 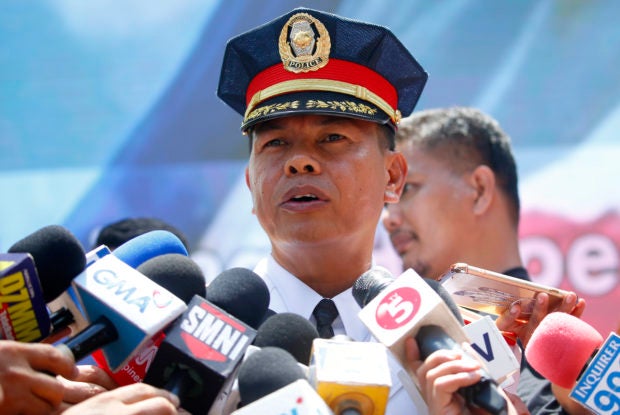 Philippine National Police Chief Inspector Jovie Espenido is interviewed by the media following the commemoration of National Heroes Day, a national holiday, at the Heroes Cemetery Monday, Aug. 28, 2017 in suburban Taguig city, east of Manila, Philippines. Espenido, whose assignments in two cities in central Philippines led to the killings of two mayors allegedly named by President Rodrigo Duterte in his drug watch list, announces in a nationwide broadcast, Espenido’s transfer to the central Philippine city of Iloilo, whose town mayor is also included in Duterte’s watchlist.(AP Photo/Bullit Marquez)

“Having said that, the assignment to Iloilo City of Espenido is a cause of concern,” the senator said, referring to the police official’s controversial track record.

Drilon, however, expressed hope that Espenido would heed Mr. Duterte’s order to “follow the rules of engagement” in confronting the drug problem in Iloilo City.

Sen. Panfilo Lacson said he believed Espenido “knows what to do.”

“While there’s a lot of doublespeak in the President’s marching order, ultimately, it is on Espenido’s account and responsibility to uphold the rule of law and follow the rules of engagement in his new place of assignment,” Lacson said in a text message.

He said he knew Espenido, who worked with him in the Presidential Anti-Organized Crime Task Force 17 years ago.

“I know him as a focused, diligent and upright noncommissioned officer,” Lacson said. “I am banking on that and more to say what I just said about the man.” —With reports from Nestor Corrales and the wires