Diesel in Davao to soon cost just P16 per liter 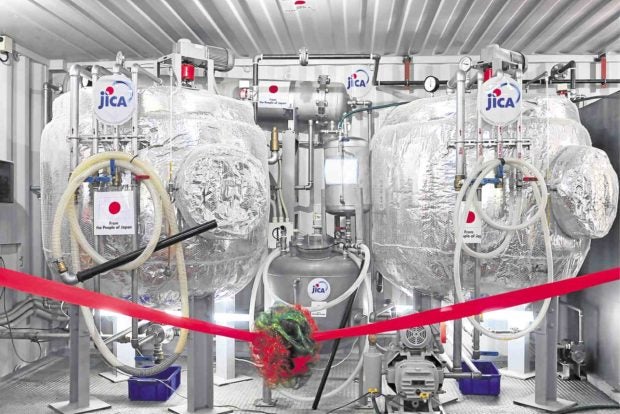 Some of the machines that would turn used cooking oil into biodiesel. —PHOTO COURTESY OF DAVAO CITY PIO

DAVAO CITY — A plant that could produce biofuel that would cost no more than P16 per liter has been opened here on Friday, raising hopes, too, for a stop to the dumping of used cooking oil into the city’s rivers and canals.

The plant, an initiative of the city government, Japan International Cooperation Agency and two Japan-based companies, would process at least 1,000 liters of used cooking oil into biodiesel daily.

Shigeto Mizumo, of the company Biomass Japan Inc. which was also involved in the project, said a feasibility study showed the city could easily supply the daily requirement for used cooking oil.

He said a year before the completion of the plant, proponents were able to collect at least 250,000 liters of used cooking oil around the city.

Mayor Sara Duterte, who led opening ceremonies for the plant, said biodiesel produced at the plant would cost only P16 per liter compared to P29 per liter for regular diesel.

In the next three months, biodiesel produced at the plant would be tested on 30 jeepneys to determine fuel efficiency compared with regular diesel.

But Mizumo said biodiesel produced at the plant had already been tested on several government garbage trucks.

“There has been no problem at all,” said Mizumo of the test on government garbage trucks.

Mayor Duterte said that after the three-month test on jeepneys in the city, biodiesel would be sold to the public. —JUDY QUIROS