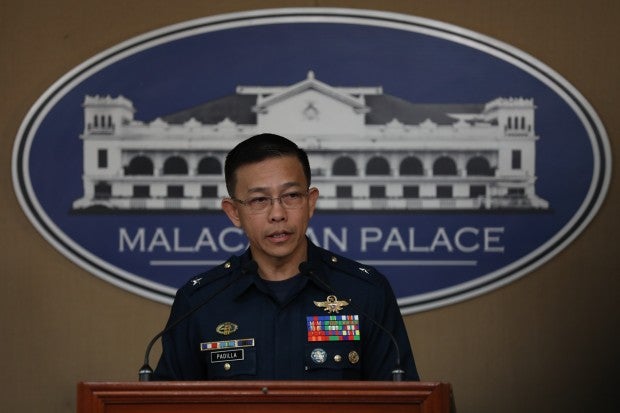 The military on Thursday recaptured the Grand Mosque in the conflict-torn Marawi City where terrorist have been holed up with their civilian hostage, the Armed Forces of the Philippines (AFP) said Friday.

“So early yesterday morning, that assault on the Grand Mosque was conducted. We met resistance in the surrounding areas over that less than a month of time, until we got to that point when we were able to assault the Grand Mosque,” said AFP Spokesperson Brig. Gen. Resituto Padilla in a Palace briefing.

Padilla said “there was resistance offered by the enemy who were holding the area, while the main forces of the enemy were retreating.”

“Unfortunately, we did not find any hostages in the facility,” he said.

The retake of the Grand Mosque, he said, was “a significant development” in the ongoing fight with Maute terrorists.

“The Grand Mosque is central—is located in the central area of Marawi. It is the most significant landmark because it being the biggest mosque in the area,” he said. The military earlier said that the terrorists have used mosques as their logistics hub and snipers’ nest.

The military official said the operations to retake the Grand Mosque started a month ago but security forces “did not conduct a frontal attack because we wanted to preserve the Grand Mosque.”

He said clearing operations in the Grand Mosque is still ongoing.

“Right now, we’re still clearing the facility of unexploded ordnance and IEDs that we found to be in abundance in the building itself,” he said.

The main battle area in the entire Marawi City is now contained to half a square kilometer grid, he said.

Asked whether there were enemies killed during the assault of the Grand Mosque, Padilla said they still have to wait for official report from the ground once the clearing operations were done.

“I don’t believe there was any recovery of any bodies. There was resistance and we were able to quell the resistance. And in the process, as I mentioned, katulad ng nabanggit ko, may tatlong nasugatan doon sa proseso ng pagpasok sa Grand Mosque (as I have said, there were three wounded in the process of recapturing the Grand Mosque),” he said.

“Pero wala po kaming nakuhang ulat—kung may napatay man, nakuha ito. So antabayanan natin. ‘Pag natapos ‘yung clearing, malaman natin siguro ‘yang kumpletong report (But we did not get any report—if there was fatality. So let us just wait. When the clearing ends we will know the complete report),” he added. JPV

Duterte back in Marawi