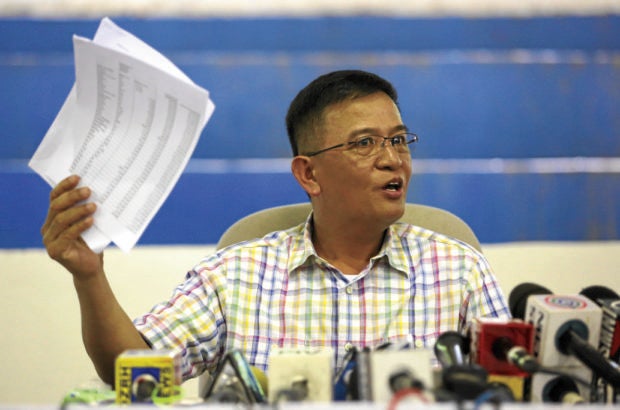 President Duterte supports all investigations of corruption allegations at the Bureau of Customs, including reports of payoffs to the outgoing BOC chief, Nicanor Faeldon, and the latter’s counterclaim that a senator’s son was involved in smuggling, Malacañang said on Thursday.

Before replacing Faeldon as customs commissioner, Mr. Duterte said he believed him to be an honest man.

Lacson also identified the “big players” at the BOC who, he said, were enjoying the quick release of their shipments.

Faeldon, in turn, said the senator made the exposé to try to cover up for his son Panfilo Lacson Jr.’s involvement in cement smuggling.

Asked why he did not name Isabelo Tibayan Jr. and Toto Sevilla as among BOC officials getting millions in payoffs as mentioned by customs “fixer” Mark Taguba in the Senate, Lacson said Tibayan was “mentioned in only one list and we tried to validate his  ‘tara’ (payola) inclusion for two days before my privilege speech.”

“That’s the reason why I and my staff didn’t include him since we were not confident unlike on the others,” the senator said.

Lacson said Sevilla was not mentioned in any of the lists given to him but added he would check the name again after he concludes his hearing on the case of Kian delos Santos, the 17-year-old boy killed in an antidrug operation in Caloocan City.

Abella said Mr. Duterte would back efforts to look into these claims and the Palace would not interfere with any of the inquiries.

“Of course, the President will support all investigations,” he said.

“We expect that the [Department of Finance] and the new BOC chief will give due consideration to Senator Lacson’s speech for example… the justice department and the Ombudsman to [file] graft charges,” he added.

As for Faeldon’s allegation against the younger Lacson, he said this had to be verified.

Lacson’s speech about the BOC payoffs came amid congressional inquiries into alleged irregularities in the bureau, including supposed payoffs to a “Davao Group.”

The name of the President’s son, Vice Mayor Paolo Duterte, has also been dragged into the issue.

Taguba testified in the Senate that he paid P5 million to Davao City Councilor Nilo “Small” Abellera Jr. to facilitate the release of his shipments.

Taguba also read his text message to a certain Tita Nani about his “enrollment” in the tara system, and the latter said she would make the arrangement with a certain Jack, the “handler of Paolo.”

The same text message also mentioned the arrangement of a meeting with “Pulong,” Paolo’s nickname. —WITH A REPORT FROM CHRISTINE O. AVENDAÑO

Read Next
Bird flu can infect humans
EDITORS' PICK
Nestlé Philippines’ ‘NESCAFÉ Plan’ bags Grand Anvil at PRSP 56th Anvil Awards
Smart reinforces superiority with best speed and mobile video experience in PH
Every Filipino home can now be a smart home with realme TechLife
New 3,045 COVID-19 cases push PH total active cases to 40,074
LTO’s P500-M deal for screws draws scrutiny
How to lose a PH genius: Wesley So officially a US citizen
MOST READ
How to lose a Filipino genius: Wesley So officially a US citizen
US lays out list of aid to ‘satisfy’ Duterte following VFA payment demand
Robredo on Sara Duterte leading poll surveys: Why are Filipinos drawn to leadership of this kind?
Rights lawyer survives attack by playing dead, loses all case files
Don't miss out on the latest news and information.