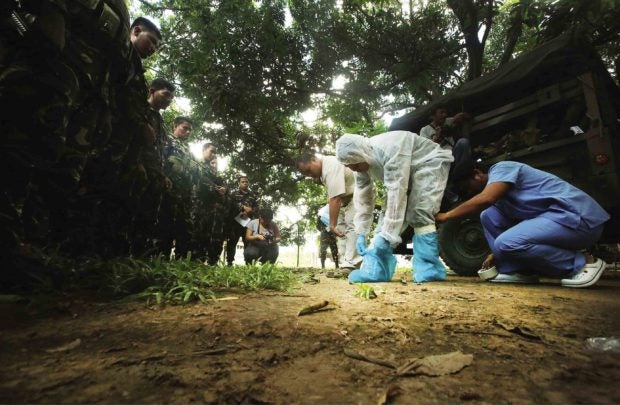 SUIT UP Soldiers watch veterinarians assist their colleague in wearing a protective suit before they are sent to a poultry farm in San Luis town, Pampanga, to contain the spread of bird flu. —GRIG C. MONTEGRANDE

CITY OF SAN FERNANDO—The bird flu virus that sickened and killed poultry in San Luis town in Pampanga province is the H5N6 strain, which can infect humans, a Bureau of Animal Industry (BAI) official said on Thursday.

The transmission rate of the H5N6 virus, however, is quite low, Dr. Arlene Vytiaco, coordinator of the BAI avian influenza control program, told reporters here.

Vytiaco said the Australian Animal Health Laboratory (AAHL), which had tested tissue samples and oral swabs from San Luis birds at the request of the Department of Agriculture, returned a confirmatory report.

Detected in China in 2013 and in Taiwan in February this year, H5N6 had caused severe infections and deaths among humans, according to the World Health Organization (WHO).

“Thus far human infections with the virus seem to be sporadic with no ongoing human-to-human transmission,” the WHO said in a December 2016 report.

The destruction of infected fowl and other birds exposed to the virus within a 1-kilometer quarantine zone around the villages of San Carlos and Santa Rita in San Luis and within a 7-km control area encircling the town has prevented the spread of infection, according to Dr. Jesse Fantone, an epidemiologist with the Department of Health (DOH) in Central Luzon.

Fantone said not all the people involved in the San Luis cull  were given the antiviral drug for human influenza A.

“The vaccine tended to create confusion because it can lead to showing flu symptoms,” he said.

So far, none of those involved in the cull has shown signs of flu, he said.

It has not yet been established whether the same strain also infected chickens and quails in Jaen and San Isidro towns in Nueva Ecija province because the samples taken on Aug. 4 and Aug. 8 were from farms in the two San Luis villages.

In a news conference in Manila, Vytiaco said the N6 strain should not be confused with the N1 strain—commonly known as severe acute respiratory syndrome (SARS)—that hit China between November 2002  and July 2003 and erupted into an epidemic that caused 8,098 cases that resulted in 774 deaths reported in 37 countries.

Although human-to-human transmission of N6 is possible, it is “very unlikely” to happen in the Philippines because of the “low” transmission rate of the virus, Vytiaco told reporters at the Department of Agriculture.

The mortality rate of N6 infections is “much lower,” she said.

In Nueva Ecija province, Gov. Czarina Umali on Thursday directed the province’s Asian Influenza Task Force to stop people from wandering into the 1-km quarantine zones put up around the villages of San Roque in San Isidro and  Imbunia in Jaen.

Umali said residents of the two quarantined villages would be given free vaccinations.

Those who helped in the culls will be vaccinated every day for 10 days, she said.

In the Visayas, at least 32 chickens have died in four backyard farms in Talay village, Dumaguete City, Negros Oriental province, since last week.

Dr. Lourdes Socorro, Dumaguete City veterinarian, on Thursday said blood samples and cloacal swabs taken from the birds would be submitted to the local office of the agriculture department.

“Everything that affects and causes the mortality of birds now is suspected cases of bird flu. But then again, we cannot make any conclusions for now. We have to go to laboratory diagnosis,” Socorro said. —WITH REPORTS FROM KARL R. OCAMPO, ANSELMO ROQUE AND ADOR VINCENT MAYOL