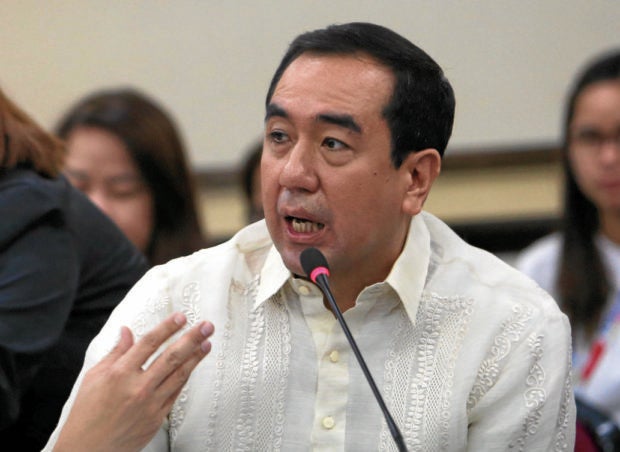 Commission on Elections Chairman Andres Bautista at the COMELEC budget hearing at the House of Representatives. INQUIRER PHOTO/LYN RILLON

Colleagues of Commission on Elections (Comelec) Chair Andres Bautista spoke as one in a rare press conference on Thursday with a single message for the embattled elections chief—it’s time to let go.

In a hastily arranged press briefing in Quezon City, six Comelec commissioners— Robert Lim, Al Parreño, Luie Tito Guia, Arthur Lim, Sheriff Abbas and Ma. Rowena Guanzon—said Bautista could use the time off for his defense and his children.

“It is our consensus that Chair Bautista can no longer effectively lead the commission,” said a statement of the commissioners read during the press briefing.

The commissioners said Bautista had given himself a week from Aug. 14 to decide whether to go on leave or resign. But, they said, two weeks had already lapsed and there was no word from Bautista.

Sought for comment, Bautista said: “As I have publicly stated, these are options that I have been considering and praying over. When I

decide, they will be the first to know.’’

Bautista, according to Guanzon, can no longer “give 100 percent of himself” to the Comelec because of the scandal gripping him.

“What we want is business as usual,” said Commissioner Lim.

Bautista, hours before his colleagues held a press briefing, said going on leave or quitting were among the options available to him in dealing with accusations of ill-gotten wealth and an impeachment case.

“We are weighing all our next steps,” Bautista told reporters shortly before attending a House appropriations committee hearing on the Comelec’s proposed P16-billion budget next year.

Asked if going on leave or resigning were among the steps he might take, Bautista answered in the affirmative.

“Of course, we want to protect the interest, first of all, of my family and the interest of Comelec,” Bautista said.

“That’s what we’re studying, contemplating and praying for,” he added.

The Comelec chair made the comments a day after Jacinto Paras, former congressman, and lawyer Ferdinand Topacio filed an impeachment complaint against Bautista.

The 23-page complaint was based largely on allegations by Bautista’s estranged wife, Patricia, who accused the Comelec chief of hiding bank accounts, investments and real estate.

The complaint also repeated an accusation made by Patricia that Bautista had received fees for referring the Divina Law Office to election service provider Smartmatic.

Bautista was also accused of betraying public trust by failing to prevent the so-called “Comeleak” data breach that compromised the private information of millions of voters in March last year.

Bautista said he had not seen a copy of the complaint but would address its allegations “at the right time and place.”

Last year Bautista declared a net worth of P176.3 million, but his wife publicly accused him of amassing nearly P1 billion in unexplained wealth.

Majority Leader Rodolfo Fariñas, however, said that the complainants—Paras and Topacio—should have personal knowledge of the wrongdoing attributed to Bautista.