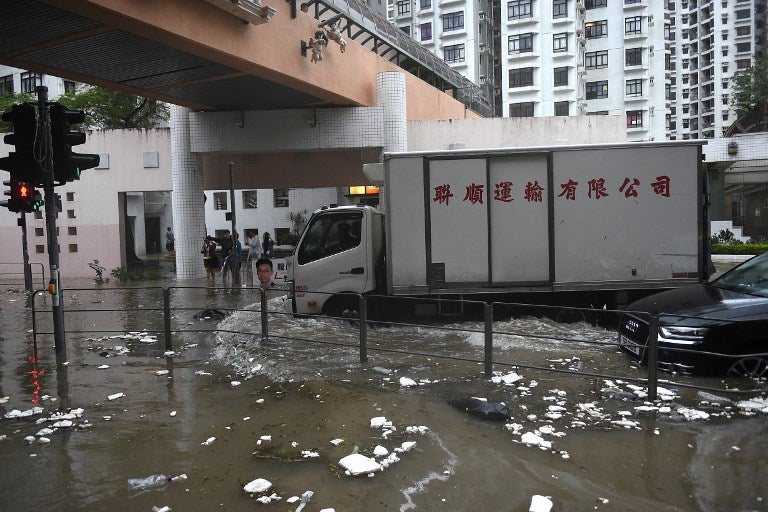 Commuters drive along a flooded road after heavy rains brought on by Typhoon Hato in Hong Kong on August 23, 2017. Typhoon Hato smashed into Hong Kong on August 23 with hurricane force winds and heavy rains in the worst storm the city has seen for five years, shutting down the stock market and forcing the cancellation of hundreds of flights. / AFP PHOTO / Anthony WALLACE

Hong Kong, China — The death toll from Severe Typhoon Hato rose to at least 16 Thursday after the storm left a trail of destruction across southern China and battered Hong Kong skyscrapers.

Eight died in the worst-hit gambling hub of Macau, where local media showed cars underwater and people swimming along what are normally streets. The enclave’s famed mega-casinos were running on backup generators.

One man was killed after being injured by a wall that blew down, another fell from a fourth floor terrace and another was a Chinese tourist hit by a truck.

The Macau government said a male body was found in a carpark early Thursday, but details on the other victims there were not immediately available.

The enclave’s sprawling Venetian casino resort was on back-up power Wednesday and without air conditioning or proper lighting, according to one source, while residents took to social media to complain about city-wide power and mobile phone network outages.

Firefighters in Macau have been carrying out rescue work, while a cleanup operation is underway. 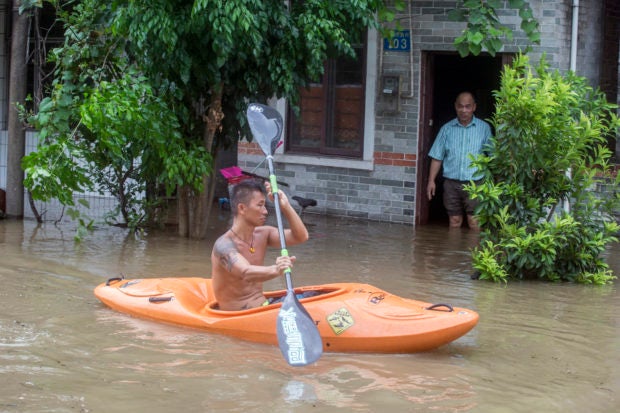 A man paddles a kayak along a flooded street caused by Typhoon Hato in Guangzhou in southern China’s Guangdong province Wednesday Aug. 23, 2017. Thousands of people were evacuated from parts of the mainland coast ahead of the storm’s arrival, China’s official Xinhua News Agency reported. (Chinatopix Via AP)

In Hong Kong, Hato had raised the most severe Typhoon 10 warning, only the third time a storm of this power has pounded the financial hub in the past 20 years.

More than 120 were injured as the territory was lashed with hurricane winds and pounding rain, with police adding that one 83-year-old man earlier thought to be a victim had actually committed suicide during the typhoon.

In the neighboring southern Chinese province of Guangdong, at least four people died and 26,817 were evacuated to temporary shelters, the official Xinhua news agency said. Nearly two million households were briefly without power.

Hong Kong and the surrounding region is regularly besieged by typhoons between July and October.

The city saw its strongest storm in 1962 when the eye of Typhoon Wanda passed over and gusts of 284 kilometers per hour were recorded.