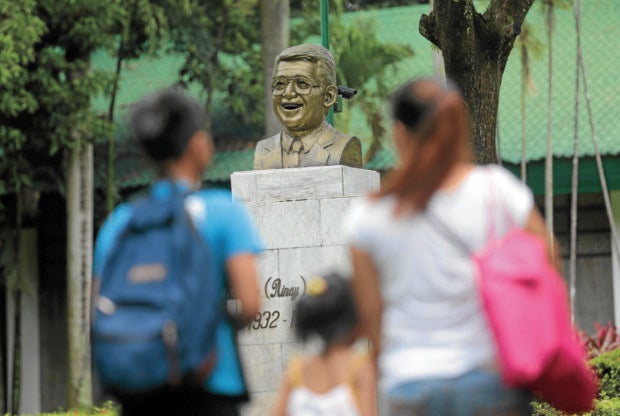 Supporters of the martyred Sen. Benigno “Ninoy” Aquino Jr. are dusting off their yellow shirts for his 34th death anniversary today, as they call on Filipinos to have “the same courage” he showed in the fight for democracy in the country during the Marcos dictatorship.

“Yellow is beyond political parties. It is the color of standing up for democracy [even] in other parts of the world,” former social welfare secretary Dinky Soliman told the Inquirer over the weekend.

Soliman served in the Cabinet of former President Benigno “Noynoy” Aquino III, the only son of Ninoy and former President Corazon Aquino, considered the country’s democracy icons who became instrumental in the ouster of dictator Ferdinand Marcos.

Soliman and other Cabinet members of the second Aquino administration will join the former President and his sisters in remembering their father.

In a statement, President Duterte on Sunday said Ninoy’s assassination inspired the peaceful revolution in 1986 that restored democracy and civil liberties in the country.

“May this year’s commemoration continue to strengthen his legacy of promoting solidarity and patriotism among our people, especially in these troubling times,” the President said.

“Through his words of wisdom, let us reflect on his life and realize that, indeed, the Filipino is worth dying for,” he added.

Ninoy was assassinated at the old Manila international airport (now renamed after him) when he returned to the country in 1983.

His death sparked protests that eventually led to the 1986 Edsa People Power Revolution that toppled the Marcos regime.

“History is witness to how Ninoy’s work as a journalist and politician drove him to effect positive and meaningful changes in our society,” Mr. Duterte said.

“Throughout his career, he fought for what was right and just. Up until the very end of his life, he inspired a peaceful revolution that resulted in the liberties we enjoy today,” he added.

The President said Ninoy’s actions showed that everyone should “aspire for the common good” even if doing so would be unpopular.

“Even at a time when hope was lost, he remained steadfast in his struggle to restore democracy through nonviolent means,” Mr. Duterte said.

Soliman said today’s events were organized “to commemorate the courage of Senator Ninoy,” with the hope “that we may have the same courage today.”

This morning, there will be a commemorative activity at the Ninoy Aquino International Airport and a Mass and program at Manila Memorial Park where Ninoy and Cory Aquino are buried side by side.

Soliman said the organizers of today’s events were the People Power Volunteers for Reform and The Silent Majority.

She added that the August Twenty One Movement (Atom) would also take part in the activities. Atom was organized shortly after Ninoy’s assassination. Among its founders was the late Sen. Agapito “Butz” Aquino, younger brother of Ninoy.

The crowd today is expected to be bigger than the one that gathered for Cory Aquino’s death anniversary on Aug. 1. That time, the Aquino siblings noted that it was not popular to be seen with them once again like what they had experienced during martial law.

They expressed gratitude to the small but loyal crowd that joined them in remembering their mother.

Critics of the Duterte administration, who have organized protest actions against the President and his draconian policies, have adopted black as a more neutral color.

But Soliman said “we have to remind people what [yellow] really stood for.”

“Yellow was the color of courage; of standing up for our rights; of fighting against the dictator. It is to honor the spirit of Sen. Ninoy Aquino who believed and acted on his principles, [that] the Filipino is worth dying for,” she said.

Ninoy’s death anniversary coincided with the public’s growing alarm over the spate of killings in Mr. Duterte’s war on illegal drugs.

A protest rally will be held later today to condemn the killing of Delos Santos and other victims of extrajudicial killings. —With a report from Philip C. Tubeza