Chasing the ‘greatest show on earth’ 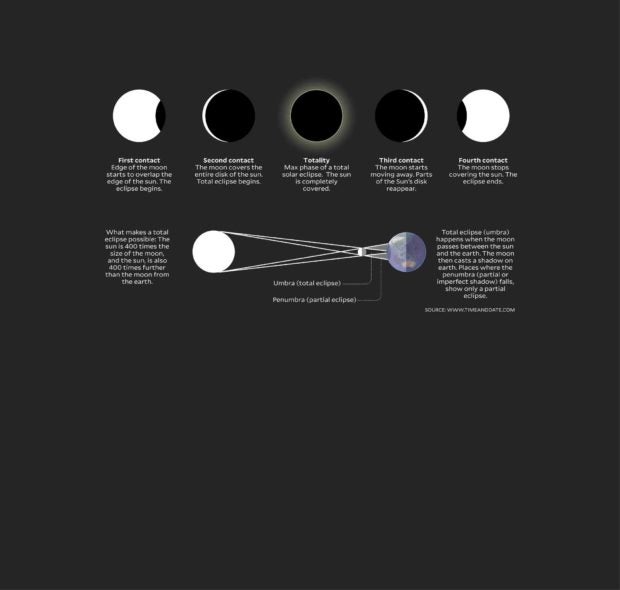 LOS ANGELES — A few days ago, my family and I embarked on a road trip like no other, hoping to experience a heavenly spectacle that is being called the greatest show on earth.

The total solar eclipse in the United States this Monday (early Tuesday morning in Manila), is also being hyped as the “Great American Eclipse,” because it is the first of its kind in almost a century and can be seen only in the US.

We will drive from this city of 4 million people to the nearby state of Oregon in a town called Madras, where the population is just over 6,500. But with its historically clear skies and strategic location along the so-called “path of totality” — where the moon will completely blot out the sun for about 3 minutes — Madras is an ideal place for eclipse-chasers.

My wife, our two sons and I will hop into our beat-up Honda minivan (we call it Oreo—for Old Reliable Odyssey), and zip past the foamy surfs of the Pacific Ocean, rows and rows of verdant vineyards, the Silicon Valley, and the Golden Gate before crossing into the Oregon border in the scenic Pacific Northwest.

When we enter Madras, we will be part of the mass of humanity streaming into cities and small towns within the 112-kilometer shadow (called the umbra) cast by the moon as it crosses the 12 states in its path—from Oregon in the West Coast to South Carolina in the East Coast—in 94 minutes.

I saw my first partial solar eclipse when I was 24 in my hometown of Palo, Leyte, on March 18, 1988. I still remember how I raised a strip of an exposed 35-millimeter Kodak film into the darkening sky to see the eclipse that morning. But from where I was, in about 50-percent darkness, the sun looked like a half-eaten cookie. And like eating a half-cookie, I never got my fill and craved for more.

“Wow, freak-out!” was how journalist Clayton Jones quoted then President Corazon Aquino describing the same 1988 eclipse when he sent his dispatch to the US-based Christian Science Monitor. Aquino traveled with her then Defense Secretary Fidel Ramos to General Santos City, the center of total darkness where thousands of stargazers had converged.

I also remember how fearful superstitions had ruined the Filipinos’ day in the sun and overshadowed the importance of those rare 3 minutes when day turned into night.  Even novelty singer Yoyoy Villame wrote the song “Eklipse”  to mark the event.

As the next total solar eclipse in the Philippines will be in 2042, I hope to be around by then as a 79-year-old shadow-chasing balikbayan.

It was in 1991, a few days before Christmas, when I found myself stepping on American soil and embracing it as my own. The awe-inspiring sights of this country’s national parks immediately brought up the wanderlust in me.

After a failed attempt at starting a newspaper in this city, I found myself getting a job as a courier for Federal Express.  Shelving my dream of becoming a writer in America, I realized that driving a truck everyday to deliver other people’s stuff made sure we had a decent roof over our heads and food on our table. It also paid our bills and sent my two sons to school.

Little did I know that Fedex’s vacation benefits would open up travel opportunities for myself and my family, allowing us to travel to 23 states. This road trip to Oregon was our 24th.

We are not exactly umbraphiles (literally, lover of shadows) but an article in the January issue of Westways, the official magazine of auto club members in Southern California, which detailed the eclipse’s accessibility from almost anywhere in the US, made us plan for this event.

Unlike the expected horde of foreigners, tourists and hardened eclipse-chasers flooding the US to witness this phenomenon, our great advantage as locals is that we can just get into our cars and spend a day’s drive to any darkened area in America where the eclipse is total.

But the eclipse this year is happening at a time of rising racial tensions here in President Trump’s America, stoked by recent riots in Charlottesville, Virginia, as well as creeping hysteria over North Korea’s threats of raining missiles on US territories.

The horror and terror of a drug-related bloodbath in my homeland sanctioned by President Duterte weighs as heavily on my mind, even as our car points toward an adventure promising awe and wonder.

Trump, who once called Filipinos “animals,” and Duterte, who slaughters purported drug users like animals, are at the heart of my personal anxiety.

Going out there on the open road to chase this eclipse may just be the salve I need to soothe the angst I feel about the present state of the world around us.

Hopefully, this eclipse would correct the disorder in the cosmos and prove to be a harbinger of good fortune and unity in our troubled world. I also wish that the event would prove that, despite the differences that set us apart, we humans look up to the same heavens that shelter us, eclipse or no eclipse.