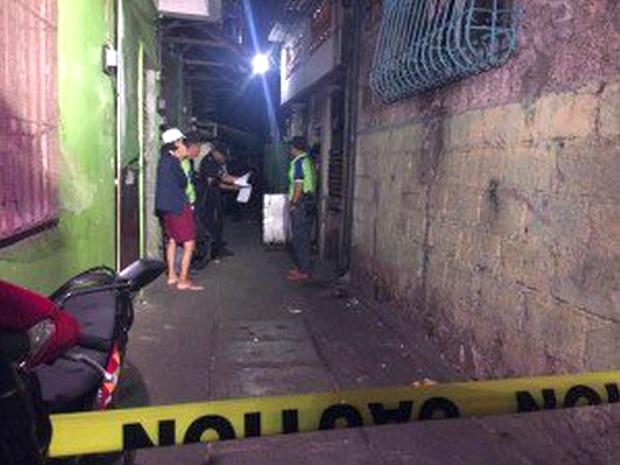 The scene outside of the house where 17-year-old Hideyoshi Kawata was shot by police officers on Jan. 8, 2017. (File photo by CYRILLE CUPINO / Radyo Inquirer)

Even before Kian delos Santos, another 17-year-old student with a clean record had already been killed in a drug raid in Caloocan city at the start of the year.

Hideyoshi Kawata, a Hotel and Restaurant Management student in STI, would have been turning 18 on Aug. 23.

He would have carried out plans to marry his girlfriend, 17-year-old Mishel Ordillos, raise their baby son, and migrate abroad, had his future not been snuffed in an anti-narcotics operation led by the Caloocan Police Community Precinct 1 in January.

Kawata was killed by the police in the house of his mother Mitos in Barangay 154 in Bagong Barrio in the wee hours of Jan. 8, after the police failed to capture their original target, an Emilio “Buboy” Bolanin – his mother’s boyfriend – who was reported to be a drug dealer and a drug den operator.

Police reports claim that Bolanin had run to hide in the house in the middle of a sting operation by the police.

The half-Japanese Kawata had then supposedly confronted the pursuing law enforcers with an Uzi, prompting the police to shoot him dead.

But Ordillos, who was pregnant at the time, and who was with Kawata when the police barged into the house, told a completely different story. She said her boyfriend did not even own a gun and did not have any criminal record. She said he pleaded for his life on account of his young family.

In an interview with the Inquirer, Ordillos said she and Kawata were simply sleeping over at Mitos’s house that night, in another room facing that of Mitos and Bolanin, because they would be accompanied by Mitos to a hospital for a prenatal checkup the next day.

Ordillos said the police barged into the rooms on the second floor of the house and pointed guns at her and Kawata, demanding to know if he was “Buboy.”

In the other room, Bolanin had jumped out of the window to flee.

Mitos would later try showing the police Kawata’s identification documents to prove he was not their target, but the police simply proceeded to drag a terrified Kawata downstairs.

Despite their protestations, the women were eventually herded out of the house, and were kept out by other police officers guarding the perimeter.

According to Ordillos, Mitos had said Kawata even pleaded for his mother not to leave him.

Still waiting outside, Ordillos could hear Kawata continue to beg for his life, before six gunshots rang out.

Kawata died of multiple gunshot wounds in the torso.

Ordillos gave birth in April. Kawata never got to meet his son, Hyrie, who Ordillos said was named by Kawata hours before he died.

Ordillos and Mitos has filed a complaint with the Commission on Human Rights against the police listed as taking part in the bloody operation.

In their counteraffidavits, the 13 police officers denied the allegations against them.

Ordillos vowed that the people responsible for Kawata’s death would be held into account, even if it would happen after the Duterte administration.

Belying police assessments that cases such as Kawata’s were “isolated,” Ordillos’s mother, Eleonor, pointed out that there had been other drug raids in the neighborhood.

“It’s just that what happened to Hide was painful because he wasn’t like that. He had no record. He was just a student.”

“For me, even if a person was a drug user, they’re still human. But how can they change if you already kill them? You just end up punishing their families, too,” Eleonor said in Filipino. “And even if you kill all addicts, it seems they never run out. It’s just getting worse.”

“Since these killings started, people have started to become harsh. Their minds run differently now. When they get mad, they no longer recognize laws. Killing would be at the top of their minds. There is no longer any peace in the Philippines. The Filipinos are being decimated,” Eleonor said. /atm