Confederate monuments removed or vandalized across the US 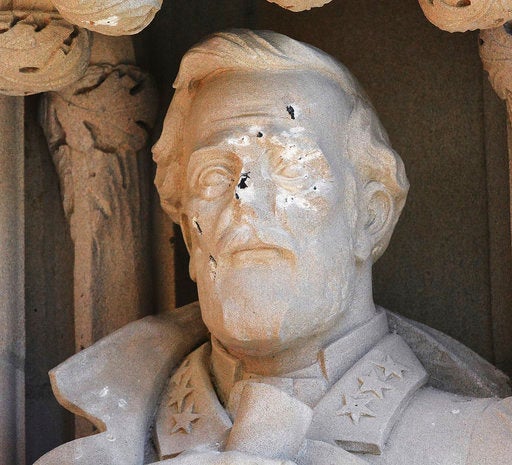 The defaced Gen. Robert E. Lee statue stands at the Duke Chapel on Thursday, Aug. 17 2017, in Durham, N.C. Duke President Vincent E. Price said in a statement that he had already been meeting with members of the Duke community to discuss how to deal with strong reactions to the statue. But he says it’s wrong for an individual to vandalize a house of worship. (Bernard Thomas/The Herald-Sun via AP)

Confederate monuments are being removed around the country under pressure from those who say they honor a regime that enslaved African-Americans. The pace has increased, however, in the wake of last weekend’s deadly confrontation at a white nationalist rally in Charlottesville, Virginia.

A look at monuments that have been removed, covered up or vandalized in recent days:

A statue of U.S. Supreme Court Justice Roger B. Taney, who wrote the 1857 Dred Scott decision that upheld slavery and denied citizenship to African-Americans, was removed from the grounds of the Maryland State House Friday and trucked away to storage. Three of four voting members of the State House Trust voted to move the bronze statue, which was erected in 1872.

The city began removing a granite fountain Friday that stood in a park as a monument to Confederate soldiers since 1916. One of a few people on hand to oppose the removal was detained when she defied orders to vacate the grounds of the fountain. She was later released. 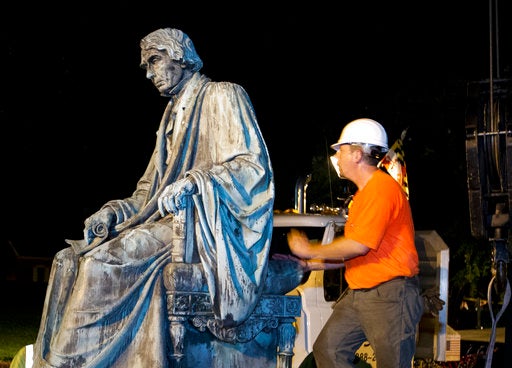 Workers positions the monument dedicated to U.S. Supreme Court Chief Justice Roger Brooke Taney on a flatbed truck after it was removed from outside Maryland State House, in Annapolis, Md., early Friday, Aug. 18, 2017. The statue of the U.S. Supreme Court justice who wrote the 1857 Dred Scott decision that upheld slavery and denied citizenship to African Americans, was lifted away by a crane at about 2 a.m. It was lowered into a truck and driven away to storage. ( AP Photo/Jose Luis Magana)

A statue of Gen. Robert E. Lee at Duke University was found defaced Thursday. The statue in the entryway to Duke Chapel had damage to its nose. Another monument of a Confederate soldier that stood in front of a government office building in town was pulled down by protesters Monday night. Four people have been arrested, and authorities say more arrests are planned. Earlier, two statues in Wilmington were defaced with spray paint.

A statue outside a courthouse dedicated to Confederate soldiers was vandalized. Obscenities and other graffiti were spray-painted on the 1908 monument sometime before dawn Thursday. The damage was repaired.

A plaque honoring confederate soldiers was removed Wednesday from a cemetery and a second monument will be taken down later. The plaque lauded “the valiant” Confederate soldiers buried there. Mayor Paul Soglin said the Civil War was “a defense of the deplorable practice of slavery.”

A Confederate monument outside Phoenix was found covered in tar and feathers on Thursday. Earlier, the Confederate Troops Memorial outside the Arizona Capitol was spray-painted white. It was the second time in a week that the memorial had been vandalized.

Plaques honoring Gen. Robert E. Lee were removed from the property of a now-closed Episcopal church in Brooklyn on Wednesday. Meanwhile, Gov. Andrew Cuomo also called on the Army to rename two streets at nearby Fort Hamilton that honored Lee and Gen. Thomas “Stonewall” Jackson.

Four Confederacy-related monuments were hauled away on trucks under cover of darkness late Tuesday night and early Wednesday. Mayor Catherine Pugh said she was concerned that such statues might spark violence.

A 1914 monument honoring fallen Confederate soldiers was splattered with paint earlier this week. Opponents are signing a petition to have it removed from a neighborhood near the University of Tennessee campus.

A 52-foot-tall obelisk honoring Confederate soldiers and sailors was covered by wooden panels at the mayor’s order. The 1905 monument is in a downtown park. The cover-up Tuesday prompted a lawsuit by Alabama’s attorney general, who argues that it violates a new law prohibiting the removal of historical structures, including rebel memorials.

Hollywood Forever Cemetery, where many movie legends are interred, removed a 6-foot Confederate monument that was erected in 1925. The stone and attached plaque stood near the graves of more than 30 Confederate veterans and their families.

The city removed a plaque naming Confederate President Jefferson Davis from a downtown plaza Wednesday. The 1926 plaque honored San Diego as the Western terminus of the Jefferson Davis Highway between Virginia and California.