Barcelona's victims: A snapshot of the world  | Inquirer News

Barcelona’s victims: A snapshot of the world 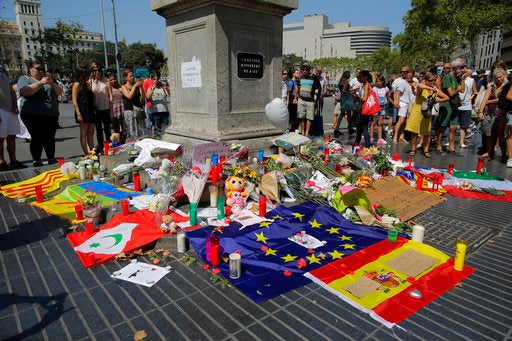 People look at flags, messages and candles placed after van attack that killed at least 13 in central Barcelona, Spain, Friday, Aug. 18, 2017. Police on Friday shot and killed five people carrying bomb belts who were connected to the Barcelona van attack, as the manhunt intensified for the perpetrators of Europe’s latest rampage claimed by the Islamic State group. (AP Photo/Manu Fernandez)

PARIS  — The dead and injured in Barcelona were a snapshot of the world — men, women and children from nearly three dozen nations — testifying to the huge global appeal of the sun-kissed city.

Families, friends and government officials from Paris to Sydney, San Francisco to Berlin scrambled Friday to discover whether their loved ones and citizens were among those mowed down by suspected Islamic extremists who zig-zagged down Barcelona’s always crowded Las Ramblas promenade in a van, killing 13 people and injuring more than 100 others.

A related attack early Friday morning in the popular seaside town of Cambrils, south of Barcelona, took the death toll to 14. Here is a look at some of the victims:

One of his nieces, Raquel Baron Lopez, said on her Twitter account that Rodriguez, 60, died immediately when he was struck by the van. After the attack, Lopez posted pictures of her uncle on Twitter when his family was looking for him and trying to find out whether he was alive.

The mayor of Lanteira, the southern town in Spain where Rodriguez was born, confirmed his death to Spanish media.

His death was confirmed in a tweet by Italian Premier Paolo Gentiloni. 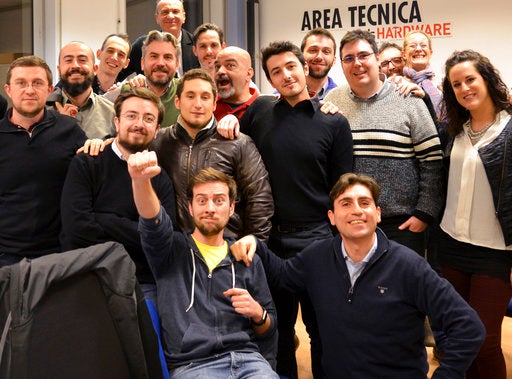 This December 2016 photo provided Friday, Aug. 18, 2017 by Tom’s Hardware Italy shows Bruno Gulotta, at center wearing a black shirt, with his colleagues at their office in Legnano, near Milan, Italy. Gulotta is one of the 14 victims of Thursday’s deadly van attack in Barcelona. (Tom’s Hardware Italy via AP)

The mayor in his town, Legnano in northern Italy, confirmed Gulotta’s death. One of his Gulotta’s work colleagues, Pino Bruno, told the Italian news agency ANSA that he saved the life of his two young children — Alessandro, 6, and Aria, 7 months — by throwing himself between them and the van that mowed people down.

Bruno said he spoke to Gulotta’s wife, Martina, and that she told him her husband had been holding the 6-year-old’s hand on the tourist-thronged avenue when “the van appeared suddenly.”

“Everyone knelt down, instinctively, as if to protect themselves,” Bruno said, adding that Gulotta put himself in front of his children and was fatally struck.

Gulotta was a sales manager for Tom’s Hardware Italia, an online publication about technology.

“Rest in peace, Bruno, and protect your loved ones from up high,” read one tribute on the company’s web site. 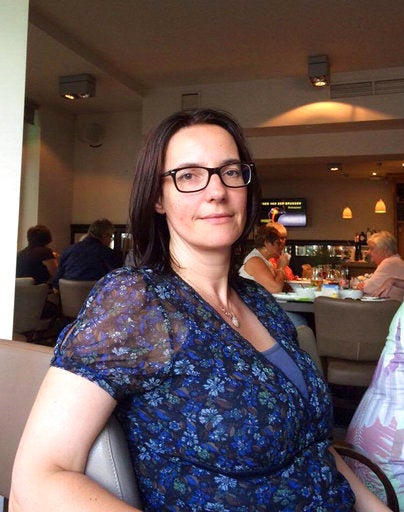 Undated handout photo provided Friday, Aug. 18, 2017 by the City of Tongeren In Belgium of Elke Vanbockrijck who was a victim in Thursday’s deadly van attack in Barcelona, Spain. (Tom’s Hardware Italy via AP)

Arnould Partoens, president of the KFC Heur Tongeren football team, said Vanbockrijck was at the club “nearly every day,” ferrying her 10- and 14-year-old boys back and forth to training and matches. He described her as very committed, often speaking her mind about the boys’ and their teams’ performances.

“She was not negative. She was always positive,” he said in a phone interview. He said the team would hold one minute of silence before every match and training session this weekend.

Partoens said the family was on vacation in Barcelona. The boys and their father, a policeman, were unhurt, he said.

“The mother was in the wrong moment and the wrong place,” he said.

In a message of condolence on its Facebook page, the club said: “We deplore the death of Elke, the mother of two players from KFC Heur Tongeren. She was often at the club, and was committed to our club. We will always remember her as a happy woman, a caring mother and loving wife. Elke will be missed. Our deepest sympathy goes out to her two sons, her husband, family and loved ones.”

His sister, Tina Luke, told the AP that Tucker and his wife, Heidi Nunes-Tucker, were celebrating their honeymoon in Barcelona. She said they married a year ago and then saved up for the trip. She said Tucker is listed as missing and hasn’t been found among the more than 100 injured.

San Francisco broadcaster ABC-7 News reported that Tucker is 43 and from Lafayette in California.

It said the Tuckers were in Barcelona after a two-week European vacation.

It quoted brother-in-law Kalani Kalanui as saying: “They were walking through downtown when he stopped to use the restroom, moments later all hell broke loose and Heidi was swept up in the terrified crowd and she lost sight of Jared.”