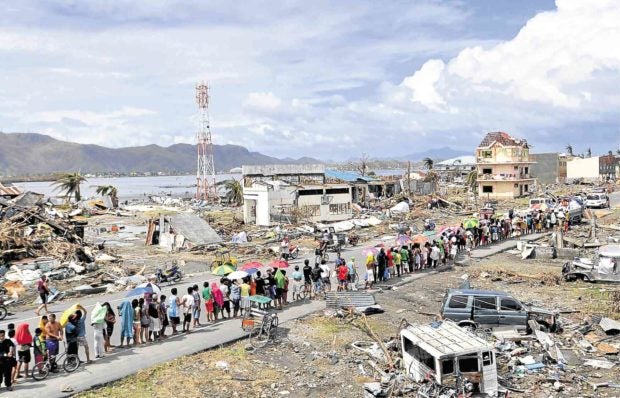 Residents queue for relief goods in Barangay 88 in Tacloban City a few days after the city was devastated by Supertyphoon “Yolanda.” —RICHARD REYES

TACLOBAN CITY—The House of Representatives has approved a bill making Nov. 8 of every year a special nonworking holiday in Eastern Visayas region to remember the thousands of lives lost and the devastation when Supertyphoon “Yolanda” (international name: Haiyan), the world’s strongest typhoon to hit land, pummeled the region.

House Bill No. 4383, which the House committee on the revision of laws approved on Aug. 8, will be sent to the Senate for deliberation and approval before it is submitted to President Duterte for enactment into law.

Yolanda devastated a large part of Eastern Visayas on Nov. 8, 2013, killing more than 6,000 people and displacing more than 2 million others.

Leyte Rep. Yedda Marie Romualdez, the bill’s sponsor, said Nov. 8 should always be remembered by the Filipino people, particularly the people of Eastern Visayas, for the “horrendous” effects it left behind.

“It is a day that we will always hold sacred in the collective memory of our people and in the history of our region,” she said in her sponsorship message. “It is a time when we commemorate—not celebrate—a tragedy after which the lives of countless families and communities were never the same again.”

“But it is not just the tragedy of the supertyphoon that we will commemorate. Nov. 8 will also be a day to pay tribute and salute the selflessness of all volunteers and organizations that took part in and contributed to the recovery and rehabilitation efforts of the communities affected by the typhoon,” said Romualdez, who is serving her first term.

She said the “overwhelming support” from various local and international groups and countries for Eastern Visayas at that time “gave us comfort and hope amid the … devastation.”

Communities under Romualdez’s congressional district, such as the the towns of Palo and Tanauan and Tacloban City, were the hardest-hit areas. Tacloban is considered the ground zero of Yolanda. —JOEY A. GABIETA