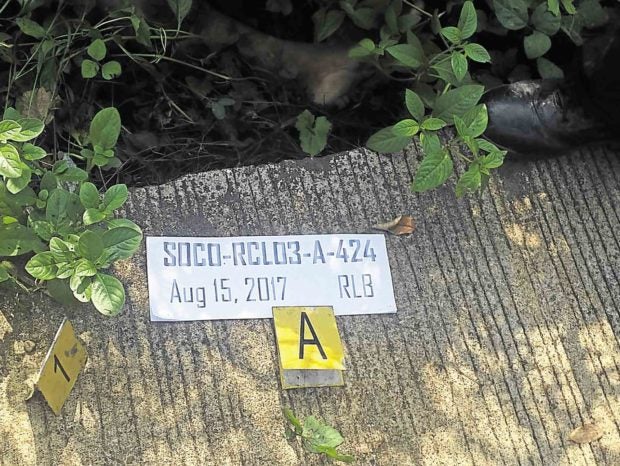 Soco operatives put a tag on one of the pieces of evidence following the bloody anti-drug operations of the PNP in Bulacan. MARILAO POLICE PHOTO

Several senators on Friday raised concern over the significantly high number of deaths during the string of anti-drug operations conducted by members of the Philippine National Police (PNP) in the last three days.

Senators Francis “Kiko” Pangilinan, JV Ejercito, Grace Poe and Sonny Angara expressed alarm over the overwhelming number of fatalities as a result of the PNP’s “one-time, big-time” anti-drug operations in Bulacan and some areas in Metro Manila.

Pangilinan condemned the “massacre” of suspected drug personalities and petty criminals saying this is not the solution for the drug problem in the country.

“Hindi ito makatarungan. Hindi araw-araw na patayan ng mahihirap ang solusyon. Tutulan ang masaker ng mahihirap (This is injustice. The solution is not in the killing of the poor every day. Oppose this massacre of the poor),” he added.

“While I support the effort to fight international drug syndicates on making Philippines as a hub for drug trade, I am just worried that these intensified killings are being used by some rogue police officers, knowing that the President has vouched to protect them,” Ejercito said in a statement.

One living proof of this abuse, according to Ejercito, is Chief Inspector Jovie Espenido who was at the helm of the Ozamiz PNP when its men raided and killed the Parojinogs. Espenido was also the police chief of Albuera, Leyte when the town’s mayor Rolando Espinosa Sr. was killed inside his cell.

Ejercito said Espenido’s “sheer arrogance should be a cause for concern.”

“Issuing a warning to suspected narco-politicians that they will be next after the Parojinogs is a display of misplaced bravado and abuse,” he said.

Poe, on the other hand, stressed that the police should not necessarily resort to killings as they are trained to restrain and not kill criminals.

“I’ve always voiced out my concern in killings like this, even former President Fidel Ramos said the police are trained to apprehend and they’re also trained to stop those who resist arrest. They’re trained for that that they don’t necessary resort to killing them,” she said.

Poe then called for a “fair and impartial” investigation on the rising number of killings by different institutions, including the Senate.

As vice chairman of the committee on public order, Poe said it will “allay fears of the public” if the Senate would launch a probe on the multiple killings in Manila and Bulacan.

Angara echoed the same sentiments, saying the Senate has to look into the recent spate of killings as the “body count is reaching alarming levels.”

“We need our people to believe in the justice system. Vigilante justice is not a systemic and long-term solution,” he said.

Pangilinan added that the drug problem should not only be treated as an issue of crime to be addressed by the police, but also a health and poverty issue.

On August 15, policemen killed 32 suspected drug criminals and arrested 109 others in Bulacan following a string of anti-drug raids under the “one-time, big-time operation.

A day later, 25 more were slain in separate anti-drug operations in Manila.

The PNP admitted that the recent police operation that resulted in the deaths of “resisting” suspects is among the police raids that registered the highest number of deaths.

The President on Wednesday lauded the killings in Bulacan, calling it “good” for the country.

“Yung namatay daw kanina sa Bulacan, 32, in a massive raid. Maganda ‘yun. Makapatay lang tayo ng mga another 32 everyday then maybe we can reduce what ails this country (The ones who died in Bulacan, 32, in a massive raid, that is good. We could just kill another 32 everyday, then maybe we could reduce what ails this country),” Duterte said in a speech before members of the Volunteers Against Crime and Corruption. JPV

Read Next
Starbucks chairman questions US’ ‘moral fiber’
EDITORS' PICK
Work-From-Home is here to stay and requires reliable logistics
Legarda emphasizes role of ICC/IPs in nation building this IP month
USAID Opportunity 2.0 calls for applicants for grants for out-of-school youth engagement
DOTr to defend proposal to increase passenger capacity in public transport
Pharmally scandal: When middlemen profit even during a pandemic
The crisis within: Suicides rise as COVID takes its toll on lives, livelihood
MOST READ
Bongbong says PH should modernize infrastructure to become Asia’s next logistics hub
PDP-Laban’s Cusi wing inks coalition deal with Reform Party
Martires asks why he is being singled out over issues on releasing SALNs
Pharmally scandal: When middlemen profit even during a pandemic
Don't miss out on the latest news and information.