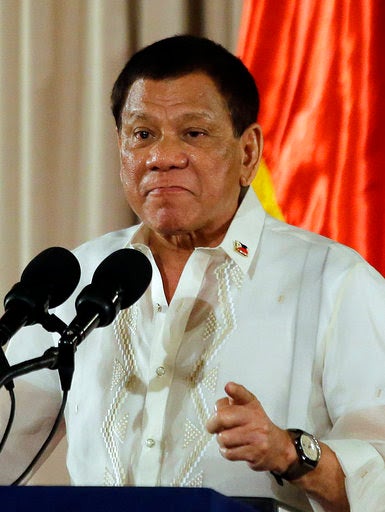 Philippine President Rodrigo Duterte gestures during his speech at the 19th Founding Anniversary of the Volunteers Against Crime and Corruption at the Malacanang Presidential Palace in Manila, Philippines on Wednesday, Aug. 16, 2017. (AP Photo/Aaron Favila)

That was how President Rodrigo Duterte on Wednesday described the killing of 32 drug suspects in Bulacan in what police said was the highest death toll in a single day since the administration launched its brutal war on drugs in June 2016.

“Yung namatay daw kanina sa Bulacan, 32, in a massive raid. Maganda ‘yun. Makapatay lang tayo ng mga another 32 everyday then maybe we can reduce what ails this country (The ones who died in Bulacan, 32, in a massive raid, that is good. We could just kill another 32 everyday, then maybe we could reduce what ails this country),” Mr. Duterte said in a speech before members of the Volunteers Against Crime and Corruption.

The Philippine National Police (PNP) has said that 32 people were killed while 109 drug suspects were arrested in the simultaneous “One Time Big Time Operation” by the Bulacan police on August 15.

Police said the mission also resulted in the confiscation of illegal drugs, grenades and firearms.

In a press briefing on Tuesday, PNP spokesperson Dionisio Carlos said the PNP-Internal Affairs Service would investigate the operations.

“That’s the standard operating procedure, kapag may (if there were) police operations that resulted [in] death, [automatically the] Internal Affairs Service conducts the investigation,” he said.

There could be an outcry again from human rights advocates over the death toll, Mr. Duterte, noted, but he said he was sure the killings were not planned because the police would get nothing from it except cases.

According to the President, some people just refuse to believe that the country faced a massive illegal drug problem, one that takes a toll on both the victims and the criminals as he slammed human rights advocates once more and warned that he would investigate them someday for “conspiracy.”

“And they make so much noise. What about the human rights? They can only make recommendations. They can write anything. Condemn the police, condemn everybody, when it comes to the recommendations, there’s nothing,” he said.

He also warned mayors against involving themselves in the illegal drug trade, and said he would suspend those who would not be able to control the trade in their jurisdiction.

He later held up what he said was his updated list of drug suspects.

He also lamented that the police who were supposed to help him were involved in the drug trade.

He addressed critics who had twitted them for not solving the drug problem, which he earlier promised to resolve in six months, only to revise the deadline after saying the problem was bigger than he had thought.

“Those fools, they say it can’t be done. They said, ‘he can’t do it.’  What if you were the ones in my place? I who ordered the killing couldn’t do it, how much more you?” he said.

“Let’s not have drama here. You will be far worse than what we have now,” he added.

But he later said he did not order the killing of specific people, but the destruction of the apparatus.

When he said he would solve the drug problem, he thought he was facing a situation similar to that when he was mayor, he said.

“I cannot finish this. Then I realized that those saying America, America, with all its power, could not do it,” he said.

But he said he would be able to solve the problem if he could kill everybody.